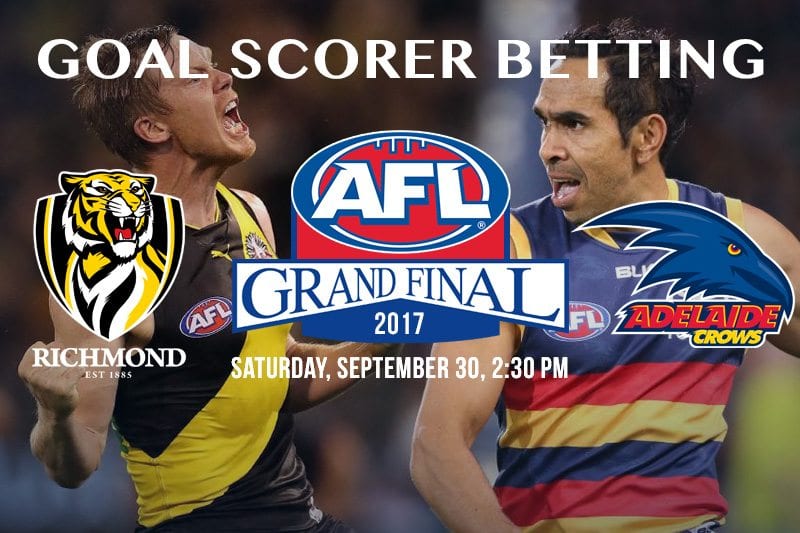 BETTING on the AFL Grand Final is a right of passage for sports punters in this country.

Whether it is a sneaky investment on the outcome of the match, a bet on the Norm Smith Medal or on something more exotic, the AFL Grand Final is genuinely the one day of the year that even the most casual of casual fans will open their wallets and have a crack.

We are looking at one of the favourite bets for the big dance, and that is the first goal scorer market. The first goal in a grand final is always a special one, so why not profit from it?

We took a look at the best options from both sides and delivered a run down of why you should invest your money in that direction.

After playing a selfless role throughout the finals series, we think Jack needs to step up and lead his side in their most important game in 35 years.

Would there be a better way to do it than by kicking the first goal of the match?

We reckon a Riewoldt goal would be the catalyst for an almighty roar from the Tiger Army, and an explosion of noise like that is hard to ignore for the opposing team.

It is likely that the Tiger forwards play a more stay-at-home role in the attacking 50 given how well all of Adelaide’s defenders rebound the ball, which will also play into Riewoldt’s hands.

Jack Riewoldt is at $10 to kick the first goal of the AFL Grand Final at Sportsbet.com.au.

The Rioli’s were built to have an impact on the AFL’s grandest stage, and what better way is there to make a statement than to boot the first goal in the biggest match of your life?

Rioli has been in scintillating form, and after booting four goals in a match-winning performance against GWS, the Tiwi Islander brings in enormous confidence into the AFL Grand Final.

If there is a quick clearance a large pack forming we think there will be no better option than Rioli, who is a crumbing master and a sharpshooter. Booting majors in big finals is in the DNA so we won’t be surprised to see Daniel get his name on the scoresheet early.

Daniel Rioli is at $14 to kick the first goal of the AFL Grand Final at Sportsbet.com.au.

Jenkins has been accused in some circles of the media for working harder towards goal than he does in a defensive manner if there is a potential goal on the end.

Is that such a bad thing? In our case it most certainly is not.

In the opening two finals Jenkins has found himself closer to goals than big forward counterpart Taylor Walker, who tends to work hard early in the game to make a statement. We are baking Tex to roam in the middle of the ground, leaving Jenkins as the sole big man inside 50.

We think Jenkins is the best option to boot the first major of the grand final given his thirst for the sticks, size, speed and mobility. In full flight he is incredibly hard to quell.

Josh Jenkins is at $11 to kick the first goal of the AFL Grand Final at Sportsbet.com.au.

We couldn’t go past the maestro.

Betts is a genuine goal scoring threat from every angle, and there is nowhere within the forward 50 that he can not slot a major from. Not only is Betts a crumbing genius but he knows how to find separation from his opponents, meaning he is often a forward 50 target.

Betts is a multi-threat option inside Adelaide’s forward 50. If the ball hits the deck he’ll be there, but he can also be found on the lead. Much is expected of Eddie on grand final day and we do not think he’ll shy away from that.

Jenkins and Betts are the two best options in the GF for the first major and we think you cannot go wrong with either elect.

Eddie Betts is the $8.50 favourite to kick the first goal of the AFL Grand Final at Sportsbet.com.au.