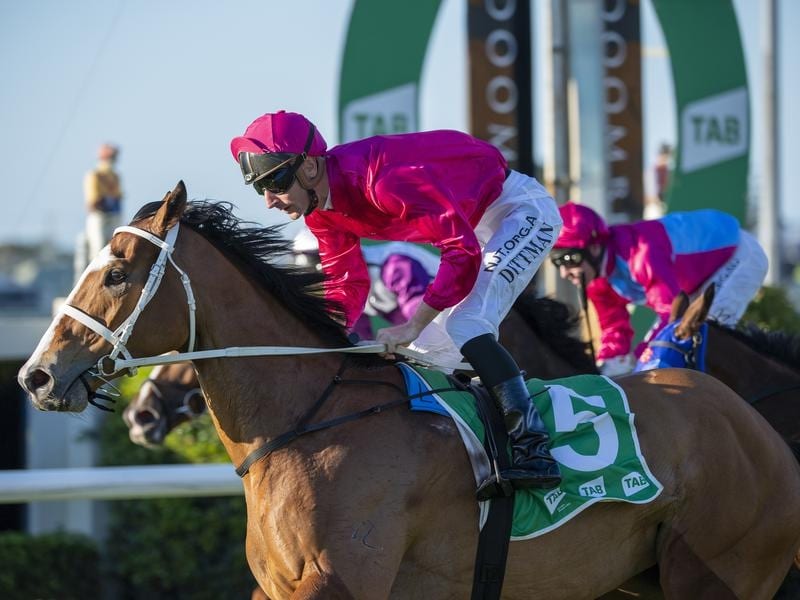 Sure Knee has capped a Doomben treble for trainer Chris Waller in winning the Sapphire Stakes.

A set of famous racing colours which once dominated winter carnivals were back in the winners’ circle for a stakes race when Sure Knee won at Doomben.

Sure Knee ($9) gave top trainer Chris Waller a Doomben treble when she charged home to beat Krone ($4.80) by a length in the Group Three Sapphire Stakes.

The mare races in the all cerise of the Ingham family which for many years ruled the Brisbane winter carnivals when they had Crown Lodge.

Their horses were then trained by John Hawkes and they won more than a dozen Group races in Brisbane in the 1990s and 2000s.

The cerise colours are still often seen in Sydney where Waller trains for the Inghams but they are rarely present in Brisbane these days.

Waller, who had earlier won with Starla and Another Dollar, had earmarked the 1600m race for Sure Knee after she had been racing well in Sydney.

His Queensland manager Paul Shailer said the mare’s future was clouded as she could stay for the rest of the winter but it would be up to Waller to decide.

“Like everyone at this time of the year Chris was looking for black- type for her. He is a master at finding the right races for these mares,” he said.

Sure Knee was bred by the Ingham family and will go to the breeding barn for them when her racing days are over.

Jockey Luke Dittman completed a winning double for Waller as he had earlier won on Another Dollar.

Krone picked up more black-type as she heads to the Magic Millions National Broodmare Sale next month.

“I thought she was going to win when she burst clear at the 200m but the winner was too strong,” trainer Tony Gollan said.

Baccarat Baby fought on well in the straight to finish third after being caught three deep for most of the race.