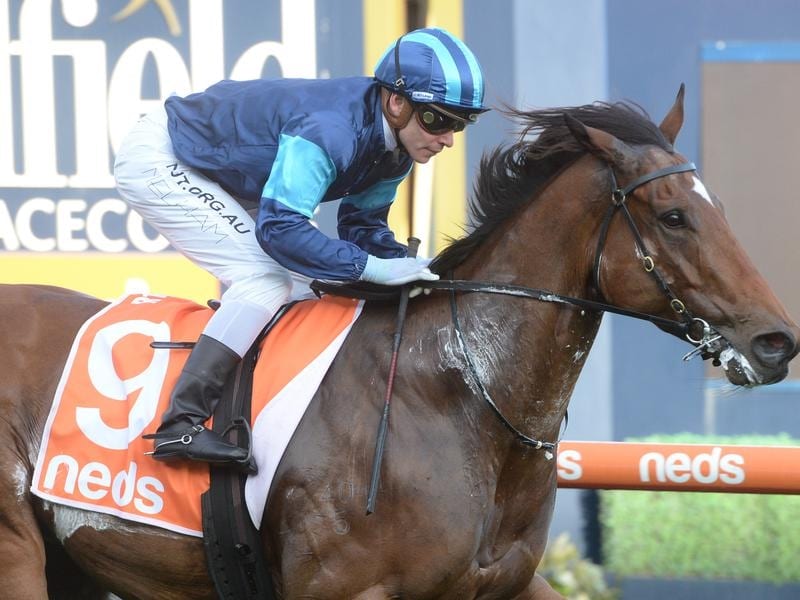 Alfa Oro has continued his rise through the classes with his fourth successive win at Caulfield.

The rise of comeback galloper Alfa Oro has continued at Caulfield with the promising gelding taking another step up to win for the fourth time in a row.

In 2018, after just two race starts, Alfa Oro fractured the cannon bone in one of his front legs which required screws and a plate to be inserted to repair the serious injury.

After more than 21 months off the racing scene, the Matt Laurie-trained Alfa Oro made his return with a runner-up finish at Pakenham in April before starting his winning sequence at the same track two weeks later.

He scored his first city win at Flemington last start and added another with an even more impressive 2-1/4 length victory in Saturday’s Neds Handicap (1100m).

“I’m a bit short of words, to be honest, because it’s been a long process,” Laurie said.

“I thought we had a smart one very early on, and to see this happening it’s a good result.

“He’s a very loveable horse. There’s been a lot of people involved in getting this horse back.”

Alfa Oro, the $2.60 favourite, pressed forward to lead and then gave a good kick to put the race away when jockey Ben Melham asked him to extend approaching the 250m.

Sansom led in the chasing pack with Ruban Bleu running on to finish another neck away third.

“He was hard on the bridle coming around the turn. He just travels so long into a race before coming under pressure,” Laurie said.

“We have to think long and hard about where we’re going to go with him.”

Melham said it was an impressive win from a “good progressive horse” and said Laurie had done a terrific job in managing the gelding’s comeback from injury.