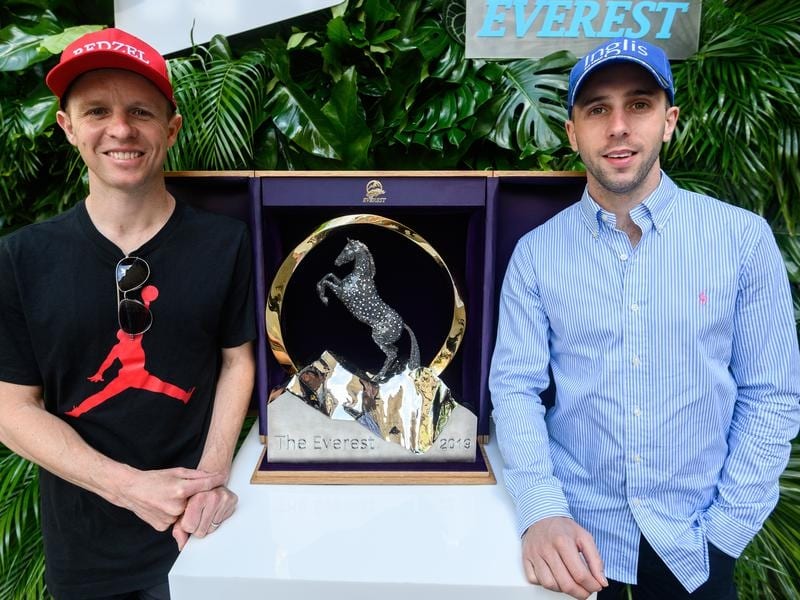 Kerrin McEvoy (l) will try to win The Everest for a third time and Brenton Avdulla (r) his first.

The $14 million Everest is riding high on a wave of momentum but comparisons to Australia’s most iconic race are unwarranted, Kerrin McEvoy insists.

But champion jockey Kerrin McEvoy, who claimed an historic Everest-Cup double with Redzel and Cross Counter last year, is refusing to play favourites.

Preparing to ride dual winner Redzel in the Everest for a third time on Saturday, McEvoy argued it was unfair to compare Randwick’s cashed-up dash with Flemington’s two-mile classic.

“I don’t like to get into the debate on which one in better,” he said.

“It’s created a lot of debate and got our sport in the forefront of everyone’s minds once the football codes are finished.

“It’s gathering momentum each year and the city and the nation are getting around it.”

A third Everest crown would be the “cherry on top” for Redzel’s career, McEvoy said, with the $6.05 million winner’s purse pushing his earnings beyond $20 million.

True to the past two years, McEvoy cannot help but feel the seven-year-old Peter and Paul Snowden-trained gelding is almost an afterthought among the all-star field as Santa Ana Lane ($4.60), Pierata ($5) and Arcadia Queen ($6) lead the betting.

“He was like that both years he won. He was sort of forgotten about,” he said.

“He’s going well. He’s a year older than last year but the Snowdens are masters of getting horses to peak on the day.”

Counterpart Brenton Avdulla, booked to ride In Her Time, was also left bemused by the betting market, with his mount a $21 outsider along with Trekking and Ten Sovereigns.

“It took Santa Ana Lane to beat her in the VRC Classic and she’s beaten Sunlight before.

“She’s beaten Pierata. All those horses that are higher up in the betting, she’s beaten them before.

“I suppose it’s a case of out of sight of mind.”

Trainer Kris Lees has had the Galaxy and Lightning Stakes winner wrapped in cotton wool since she gained the Inglis Everest slot in May.

Avdulla says the seven-year-old mare will not be troubled by not having a competitive race under her belt since March when sixth of 22 in the Newmarket Handicap at Flemington.

“It’s a well designed plan from Kris and the team,” he said.

“She’s won five from eight (first-up) and they obviously think that’s the best way for her to go into it.

“I just think we need a bit of luck our way in the barrier draw and luck on the day and I reckon she’ll run really well.”