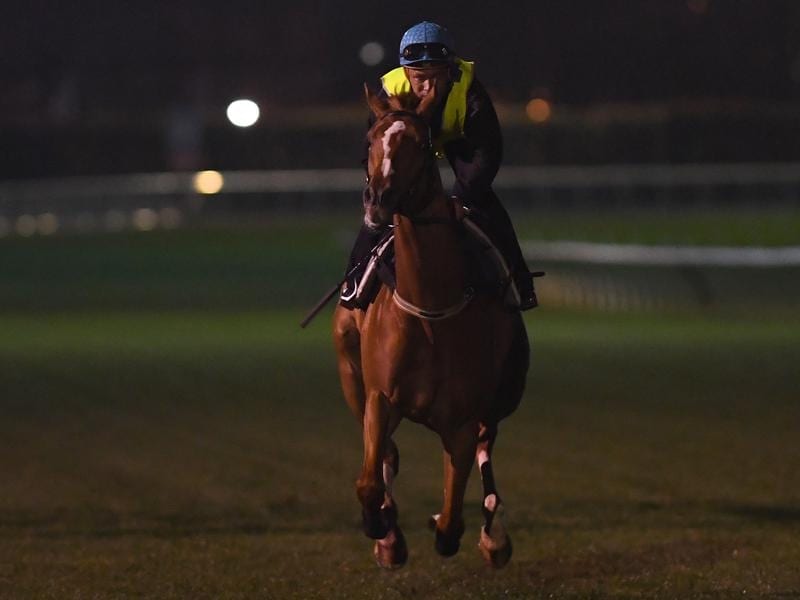 Race jockey Michael Walker has ridden favourite Finche in trackwork ahead of the Caulfield Cup.

Michael Walker has been rewarded with a golden opportunity on Caulfield Cup favourite Finche and the jockey’s hopes of a first win in the race have grown after riding the Chris Waller-trained import in an important gallop.

With Kerrin McEvoy riding in the $14 million Everest in Sydney on Saturday and Damian Lane, who rode Finche in the Turnbull Stakes last start, committed to Japanese raider Mer De Glace, Waller chose Walker to ride the favourite in Saturday’s 2400m $5 million feature at Caulfield.

“He rides a lot for us and he is used to these types of pressure environments and I thought he was a fitting rider,” Waller said.

“He does a lot of work behind the scenes and it is only fair that he gets a ride.”

Walker gave Finche a glowing endorsement after riding the horse in his first look around the Caulfield course proper on Tuesday morning.

“I’m glad we got here and gave him a look around the track,” Walker said.

“This morning it wasn’t all about time. It was just myself concentrating on him, making him change legs, get around the sweeping bends and finish off his work under no pressure.

“He did everything I asked.

“You could have sworn he’s raced here before.”

Walker said while people might have doubts about Finche being suited at Caulfield because he is a big horse, the jockey took added confidence from how he handled himself in Tuesday’s hit-out.

“He pulled up after the gallop and could have gone again. He wouldn’t have blown a match out,” he said.

“Chris and the team have got him spot-on. And I’m just really thankful for the opportunity that they’ve given me this Saturday to hopefully win my first Caulfield Cup.”

Finche finished fourth in last year’s Melbourne Cup at Flemington at his second Australian outing and his three starts this spring have included a win in the Group Three Kingston Town Stakes (2000m) at Randwick in Sydney and a second in the Group One Turnbull (2000m) at Flemington last start.

His stablemate and fellow Cup hopeful, Brimham Rocks, also had a solo gallop at the course where he won the Naturalism Stakes two starts ago.

Finche was $5 on Tuesday ahead of Mer De Glace ($7) with the final field to be announced on Wednesday followed by the barrier draw.