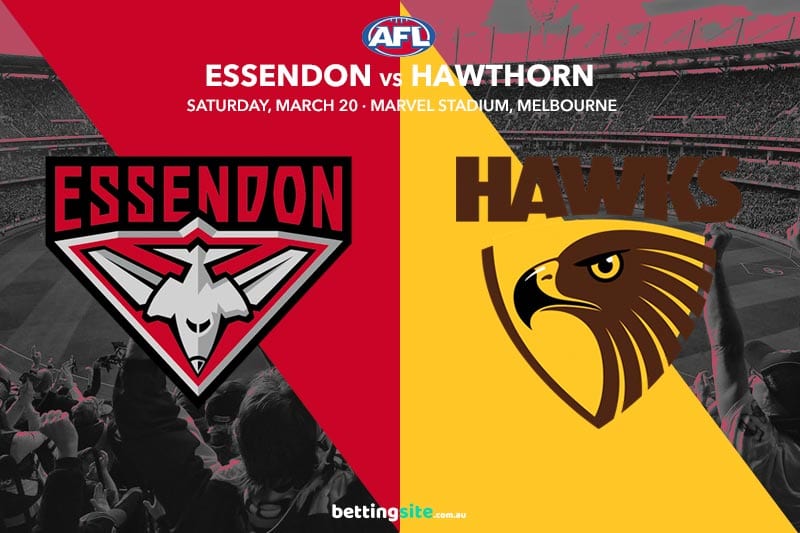 One of the more interesting matchups of round one sees Essendon and Hawthorn open their 2021 AFL Premiership seasons at Marvel Stadium on Saturday night.

Both teams made significant changes to their list in the offseason; Essendon added Peter Wright (Suns), Jye Caldwell (Giants) and Nick Hind (Saints), while the Hawks brought in Tom Phillips (Collingwood) and Kyle Hartigan (Adelaide).

With Essendon finishing 13th on the ladder in 2020 and the Hawks 15th, we expect this to be one of the closer contests of the weekend.

Two of the highest possession-winners in the last couple of years come up against each other in the opening round. Tom Mitchell averaged 25 disposals per game in 2020, while Zach Merrett averaged 26 in shorter game-time than previous years. They are crucial in getting the ball to their respective runners on the outside, and with no known lockdown players on either side, we expect both midfielders to go big on Saturday night. The $2.50 on offer at AFL bookmakers for Mitchell to get 35 disposals or more is well worth a play, as is the $2.88 for Merrett to cross the same mark.

Although they lost the likes of Joe Daniher, Adam Saad and Orazio Fantasia in the offseason, we liked what we saw the Bombers put in against Geelong in their AAMI Community Series hitout. If the Dons had kicked straight (18 behinds), they could have won that clash easily. The $2.40 on offer for Essendon to win by 1-39 points looks to be good value.

Once a powerhouse of the competition, the Hawks now have plenty of young faces in the forward line. One of those is Jacob Koschitzke, who showed plenty of potential with six goals in the preseason match against North Melbourne. Online bookmakers are paying $2 for the young forward to kick two or more goals, and we are happy to take the coin-flip odds.

The last time these two met, the Bombers got the job done by 16 points on the back of a second-half masterclass from the now-departed Joe Daniher. Having won the last two contests between the two sides, Essendon will want to kick off 2021 on a winning note after a long off season. With the new signings all looking to make an immediate impact, we are expecting an all-round performance from Essendon in a close contest on Saturday night.

Jye Caldwell to get 20+ disposals

During his early days at the Giants, Phil Davis mentioned that Jye Caldwell is one player he would want to sign to a 10-year contract. Now at the Bombers, Caldwell is one of those new arrivals who will want to hit the ground running. He gathered 24 touches in Essendon’s preseason loss to Geelong, and with plenty of midfield minutes expected, he looks good value to get 20 disposals or more at $2.40.

We are pretty confident the market has got this wrong and the Bombers should win this on Saturday night. Expect new recruits Caldwell and Wright to make an immediate impact, while the crafty Devon Smith loves a snag in prime-time footy.