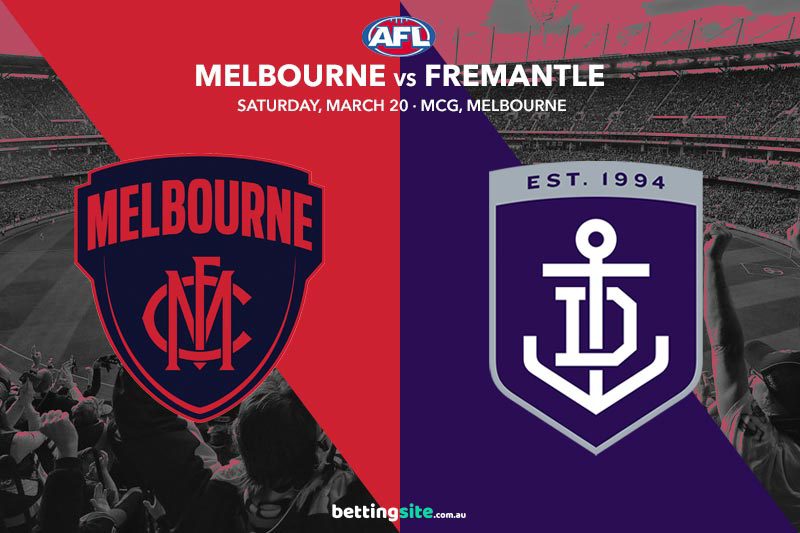 The Melbourne Demons will kickstart their 2021 AFL Premiership campaign with a tricky fixture against the Fremantle Dockers at the MCG on Saturday afternoon.

Simon Goodwin is under plenty of pressure heading into his fifth season as head coach of the Demons, and an early loss as favourites could be detrimental to his 2021 aspirations.

On the other end of the spectrum, Justin Longmuir enters his second season at Fremantle with an enormous amount of internal and external support after a 2020 campaign that showed plenty of promise.

A few key injuries will rob fans of their favourite players, but both sides still have plenty of talent out on the park to start their 2021 seasons.

Finishing equal-third in the 2020 Brownlow Medal count, Christian Petracca officially announced himself as a superstar of the competition last year. The Melbourne star faces a huge test in his first game of the season as he takes on two-time Brownlow winner Nat Fyfe. Both of these players like to push forward and make an impact inside 50, so we wouldn’t be surprised if either of them kicks a goal in their first official match of 2021.

The Demons have not won in round one since they beat the Saints at the start of 2017. With Ben Brown and Sam Weideman both ruled out for the next four-to-six weeks, and with a handful of others still needing to prove their fitness, the Dees could be forced to name a very inexperienced side this weekend.

Michael Walters is the biggest out for Freo, as the star forward suffered a hamstring injury in the club’s practice match two weeks ago. The Dockers led the competition in most defensive statistics in the second half of the 2020 season, but they were still underwhelming going forward.

We expect Matt Taberner to have a strong season. He will get more opportunities inside 50 as the Fremantle midfield develops, while Rory Lobb’s knee injury ensures that Taberner starts the year as Freo’s no.1 forward target. With Steven May needing to pass a fitness test this week, there is a chance for Taberner to start the season with a few goals.

Since the Demons will be without their first-choice key forwards and the Dockers heavily favour defence, we can see this match going well under the total points line, which is why we have chosen to lower it to 150.5 for extra value. Neither side is at full strength and it will become obvious as the game enters the second half.

Even though the Demons will have a big leg-up in the ruck with Max Gawn, the Dockers have a strong group of midfielders who have beaten the Dees in the past. As we mentioned earlier, Petracca needs to push forward and help the Demons hit the scoreboard, but we still expect a low-scoring scrap where the Dockers could even cause an upset.