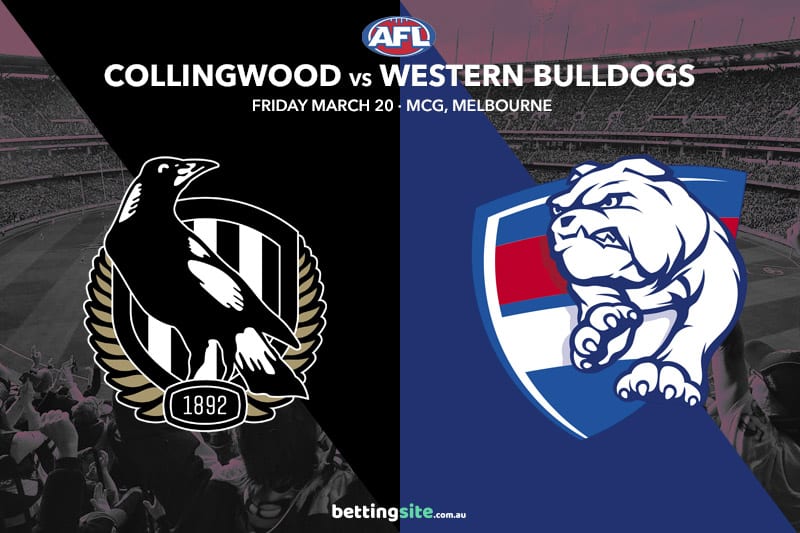 The wait is over for footy fans, and round one of the 2021 AFL Premiership season ramps up with a glorious Friday night feature between Collingwood and the Western Bulldogs at the MCG.

The AFL fixture makers could not have scripted it any better, as Adam Treloar will clash with his old Magpies teammates for the first time following an acrimonious exit in the last trade period.

Both these sides are well and truly pushing for a spot in the finals, meaning early-season matchups like these could play a big role in deciding the top eight down the track.

The matchups in the midfield are all important, but we think this pairing up the ground will have the biggest impact on the outcome of the match. Aaron Naughton has played the Magpies three times in his career, but he has only managed one goal against them. Darcy Moore held him to just two touches in their most recent clash, and it looks like they will go toe-to-toe once again this Friday. Given that record, Naughton looks a little short at $1.53 with online bookmakers to kick multiple goals in this one.

Having won their last four matches against the Bulldogs, Nathan Buckley’s Magpies are in a better position than most of the chat about them would suggest. They won last season’s opening match by 52 points with Adam Treloar and Jaidyn Stephenson both out of the team, so their absence this season will not make a huge difference.

Stefan Martin’s presence in the ruck should somewhat quell Brodie Grundy, who has monstered Tim English in the past. The entire midfield brigade looked exceptional in the preseason with five players eclipsing 30 disposals in a comfortable win over Melbourne, so you should look to parlay disposal-related legs into your same-game multi.

Caleb Daniel to get 25+ disposals

Even though Caleb Daniel is not part of the Bulldogs midfield core, he gets the footy across half-back just as much as they do. With the new man-on-the-mark rule being implemented for 2021, we can expect the little ball-magnet to rack up plenty of footy this season. Daniel had over 30 disposals in his two 2019 clashes against the Pies, while he had 20 touches last year in shortened game-time.

Oliver Henry to kick a goal

Collingwood will be debuting its first pick from the 2020 draft, as Oliver Henry was given the nod from Bucks during the week. The young forward did not have a big impact in his practice match against Richmond, but he showed excellent signs against the Cats in a private hitout a week prior. The kid is quick and strong in the air, and he will provide X-factor for the Pies up forward.

Oliver Henry to kick a goal

Even without Steele Sidebottom in the midfield, we think the Magpies will cause the first upset of 2021. The Bulldogs have not beaten the Pies since 2017, and even when the Doggies’ midfield was dominant, Collingwood found a way to win. Jordan De Goey will be explosive in the middle and up forward, while the Pies backline looks too strong to score freely against.