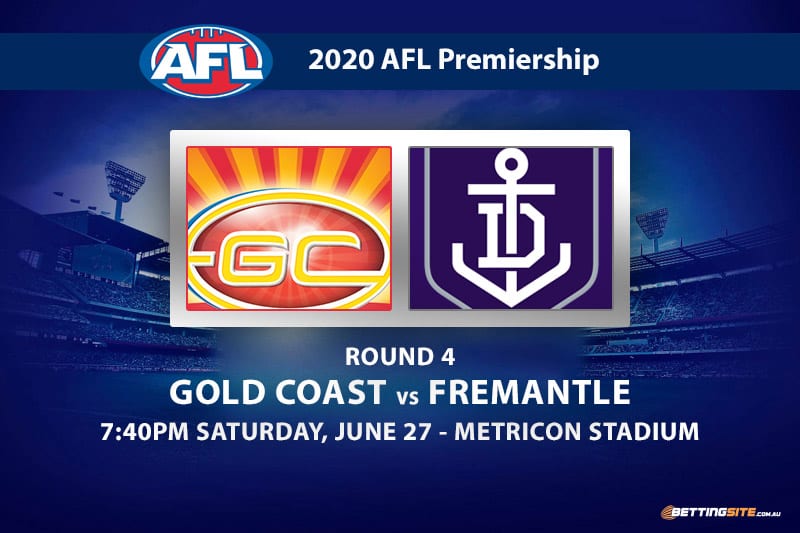 The Gold Coast Suns will look to make it three in a row when they host the winless Fremantle Dockers this Saturday night at Metricon Stadium.

This game would normally be considered a boring contest, but the Suns have evolved into one of the competition’s most watchable teams since the restart.

While Nat Fyfe has been trying his heart out for the Dockers, they just cannot kick enough goals to win a match at the moment.

The highly regarded Izak Rankine is fit to play and could make his debut for Gold Coast this week, but there is no guarantee he will find his way into a side that smashed Adelaide by 53 points.

Stephen Hill and Sean Darcy are expected to return for the Dockers, who need all the help they can get in the middle of the ground.

There is no better first-year player in the competition, as Matt Rowell is making some of the most established midfielders in the game look ordinary by comparison. The no.1 draft pick has ridiculous strength for a teenager and racks up plenty of contested possessions. Expect Rowell to have another big game following his consecutive best-on-ground performances.

The in-form Suns midfield is going to be tough to beat for Freo, so it might be worth looking at a backman in the disposals markets. James Aish is a quality user of the ball who will need to see plenty of it this week if the Dockers struggle in the centre clearances. Aish had 26 touches in round two and looked good in his new colours.

When Alex Sexton is playing good footy, there are few better forwards in the competition. Sexton has an innate ability to kick goals from anywhere, as he can snap with both feet and has enough speed to create separation on his opponents. If the Suns get Sexton involved early, he could finish the game with more than a couple of goals.

No Fremantle forward has delivered any sort of consistency over the past two seasons, but Michael Walters is still a big threat whenever he ventures inside 50. While the Freo midfield is exponentially better with Walters in the guts, his forward playmaking and goal sense are invaluable. We see the Dockers sitting him at full forward at various stages to create a tricky matchup for the Gold Coast defence.

The post-lockdown Suns have dried up opposition scoring effectively, keeping the Eagles to 46 points and the Crows to just 29. Fremantle is lacking ammo inside 50 and currently sits in the bottom five teams for points scored. The Suns should keep this game to below 125.5 given they are yet to crack the ton this season.

We think the odds for the Suns are very good as they have convincingly beaten the Eagles and Crows over the last two weeks, while the Dockers are still yet to win a match. Gold Coast looks to have the better squad overall and should win this by a decent margin.