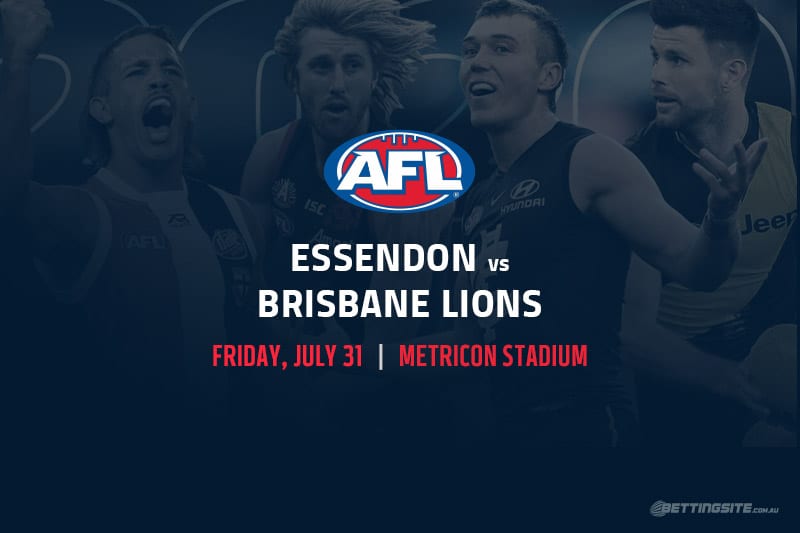 All eyes turn to Metricon Stadium this Friday night as the Essendon Bombers and Brisbane Lions go head-to-head in round nine of the 2020 AFL Premiership season.

Both teams start the round inside the top eight, which is impressive for the Bombers when you consider they have played one less game than the rest of the competition.

The Lions sit second on the ladder behind Port Adelaide on percentage only, but they will have to overcome a few personnel issues if they want to keep the good times rolling.

The back line needs reinforcing now that both Daniel Rich and Ryan Lester have gone down with hamstring injuries, while Archie Smith has an ankle problem and Dan McStay is suspended for two weeks.

We love the battle of small forwards between Anthony McDonald-Tipungwuti and Charlie Cameron, which could ultimately decide the winner of this clash.

Coming back from injury and returning from a contentious suspension are two completely different things. While the injured player might need to ease his way back into the action, the guy who copped the ban will be chomping at the bit. We think Dylan Shiel is going to be extremely damaging for the Bombers in this game, possibly even outmatching Lachie Neale in the midfield battle.

The praise for the Brisbane midfield always falls to likes of Lachie Neale and Hugh McCluggage, but Jarrod Berry quietly puts together great performances week after week. The Bombers lack a bit of size in the middle compared to most teams in the league, and that should allow Berry to use his strength around the ground and win plenty of contested ball.

The last time the Bombers faced the Lions, Anthony McDonald-Tipungwuti kicked seven goals in one of the best individual performances of the season. With Daniel Rich and Ryan Lester both out, the livewire forward should take Brisbane’s third-best small defender to the cleaners. All the Bombers need to do is put the footy in AMT’s vicinity and he should make the Lions pay on the scoreboard.

We love the Lions’ dynamic forward line with the tall and small combination of Eric Hipwood and Charlie Cameron, but Cam Rayner is the emerging talent that could turn a promising offence into a great one. The former no.1 draft pick has found his shooting boots in the past month, kicking seven goals in his last four matches. We think Rayner will start strong and open the scoring on Friday night.

Both of these clubs like to take on the game and attack through the middle, so we could be in for some fast footy with plenty of slick handball chains and turnovers in dangerous positions. The Bombers have not been the best scorers this season and got sucked into a scrap against Adelaide last weekend, but this appears to be a perfect chance to find some form in immaculate conditions on the Gold Coast.

Knowing that Anthony McDonald-Tipungwuti is going up against a weakened Brisbane defence sways us towards the Bombers, which is only strengthened with the knowledge that Charlie Cameron went goalless in his last two clashes against Essendon. With Dylan Shiel back in the middle and the ruck issue nullified due to the absence of Stef Martin and Archie Smith, the Dons should cover the line at the very least.