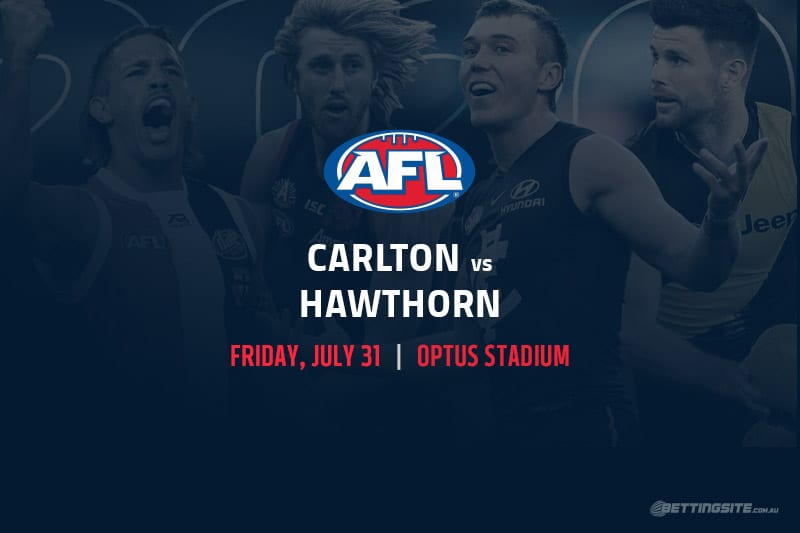 The first part of Friday night’s double-header will see the Carlton Blues and Hawthorn Hawks battle for AFL Premiership points at Optus Stadium.

David Teague and his Blues are heading in a completely different direction than the Hawks, who dropped to 15th on the ladder with last week’s loss to the Sydney Swans.

Carlton sits 11th after eight rounds but has beaten quality opposition in Geelong, Essendon and the Western Bulldogs, who are all inside the top eight.

The Blues’ growth has been evident this season, with many pundits predicting they will finish in the finals places.

Carlton loses Mitch McGovern to a hamstring strain, while Hawthorn has the option to bring back an array of players including Luke Breust, Jarman Impey, Tim O’Brien and Jon Ceglar.

The Hawks have won 16 of their last 17 clashes with Carlton, but this will be the first time in years the Blues start as favourites.

Will Setterfield plays an often undervalued role for Carlton, as the tall midfielder is used to both negate the opposition’s better midfielders and win the ball himself. Setterfield has flourished in games where he matches up against solid opponents, as per the wins over the Bulldogs and Kangaroos. The conditions will be similar against the Hawks, who boast some strong ball-winners. Setterfield has never played against the Hawks but should stand out in the wet.

If you have watched the Hawks this season, you would understand that Jaeger O’Meara has been exceptional. The tough yet classy midfielder is a ball magnet and has often carried Hawthorn in 2020. O’Meara had 42 touches in his most recent game against the Blues, where the next best disposal winner had 28. Jaeger had 25 touches and a goal in a loss to the Swans last week, so it is hard to look past him in this market at the $2.30 quote.

Kicking goals has been hard in 2020, but the intelligent small forwards have shone brightly. David Cuningham has played his best footy this season when others have struggled with the conditions, as highlighted by his two-goal effort against North Melbourne last week. The wet weather in Perth should make the match slower and harder for the taller players, which is why we will be taking Cuningham as a goalkicker this week.

In the 10 matches Chad Wingard has played against the Blues, the crafty forward has slotted 18 goals and 12 behinds. Wingard started the season like a house on fire, but he is one several experienced players that need to stand up now that the Hawks are struggling. The former Port Adelaide star has kicked five goals in his last three games against Carlton, so he looks a good chance to kick multiples this week.

Wet conditions will be a big factor in this match, but we also must acknowledge the coaching tactics of Alastair Clarkson. Hawthorn has not scored over 60 points in any of its last five matches, partly because Clarkson likes his teams to control possession and slow the tempo. If you want to boost your odds, you might even consider dropping the line as low as 117.5 and taking the unders at $2.65.

These two teams play opposing brands of footy. The Hawks are slow and uninspiring, while the Blues take the game on and play with flair. We can see Carlton winning this game by a decent margin if its forwards are switched on and play the conditions well, as the likes of Jack Martin and Michael Gibbons should excel in the wet.