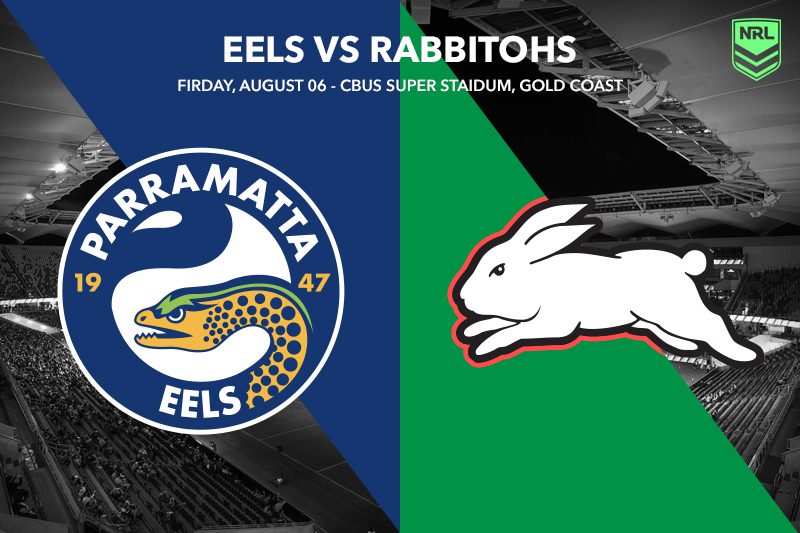 Parramatta and South Sydney will lock horns at Cbus Super Stadium in the main act on Friday Night Football in Round 21 of the 2021 NRL season.

The Eels’ season feels like it has gone in to freefall with the injury to Mitchell Moses and their annual late-season slide, while the Rabbitohs have scored 110 points in their last two outings. The last three games between these two clubs have not gone well for Parramatta, with the Rabbitohs scoring exactly 38 points in each of the wins, including a semi-final loss that ended the Eels’ 2020 campaign.

The form of Latrell Mitchell for the Bunnies should have Eels fans on high alert. He made the Saints defence look like school children last week, and he appears to be peaking as Souths head towards the finals.

Sadly for their fans, Parramatta have taken some big steps backwards in recent weeks and were embarrassed 28-0 by the Roosters. For a top-four team to not score a single point at this point in the season is a huge concern, and another loss here would put them in grave danger of missing out on a double-chance in the finals.

The Parramatta Eels have been battered from pillar to post in the media, and you might have more luck finding a needle in the haystack than finding anyone who is backing them for the win this week. Even the +8.5 line appears too small given their recent performances against South Sydney, with all three of their previous games resulting in 13+ losses.

Maika Sivo at $1.72 is a good tryscorer option for NRL same-game multis, as marking up against the inexperienced Jaxson Paulo gives him a terrific chance to cross. Clint Gutherson has three tries in his last two games against the Rabbitohs, so the $2.40 for him to cross at any time is also one to consider.

Alex Johnston might still be missing due to injury, but his replacement, Josh Mansour, was still able to cross last week and is every chance of finishing off another chance or two on the back of some Latrell Mitchell magic. He is $1.53 with the online bookmakers to score a try at any time, but are punters brave enough to take on the $3.40 for the double?

Taane Milne on the other wing is $2.50 to get a try, and give he has scored seven tries in nine appearances this year, that is a price that should be snapped up. Mitchell’s form was ominous against the Dragons last week, so he presents fantastic value at $11 to score the first try of the game.

While the line is just -8.5, punters should rush to their providers and take the $1.90 before the line blows out even further. Souths have covered plenty of big head-starts this year, and this looks like another game where they will make light work of the handicap.

The power and finesse of Latrell Mitchell up against the enthusiasm and never-say-die play of Clint Gutherson makes this a sensational positional battle. If Mitchell Moses can get back on the field, as per the team sheet, it will free up the Parramatta skipper to roam around the park relentlessly. He will be desperate to lead his side to a result, and the added class of Moses could make all the difference to his game. The left edge is where the South Sydney Rabbitohs do their damage; they have scored more than 50 tries this year down that side of the field. Mitchell is the key component that makes it all work, so just how Parramatta’s defence handles him will determine the score line.

South Sydney should win this game and do it at the 13+ margin. The $2.10 price isn’t the world’s best return for that market, but everything is suggesting it’s a great way to more than double your money.

Latrell Mitchell’s continued dominance will see Souths score multiple tries down their fearsome left edge. As such, Josh Mansour is a great chance to bag a double.

For a $69 return, you can back Souths at the 13+ margin with Clint Gutherson, Maika Sivo, Latrell Mitchell, Taane Milne and Josh Mansour all to score at any time. Why not have a gold coin or two on that?