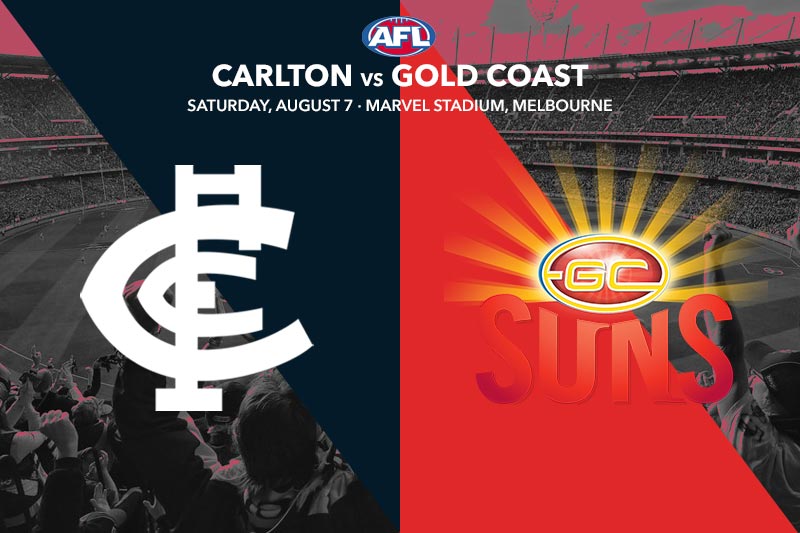 The Gold Coast Suns will look to bounce back in round 21 of the 2021 AFL season when they head to Marvel Stadium this Saturday to tackle the Carlton Blues.

The Blues, on the other hand, were impressive in their 31-point victory against the Saints, despite playing three quarters of the match without their starting ruckman.

Tom De Koning was subbed out against the Saints with a pectoral injury, but the Blues are confident the youngster can make a quick return after positive results from his scans.

The Suns will regain some experience this weekend in Brandon Ellis, who has overcome his hamstring injury and should slot back into the matchday squad.

The biggest disappointment in the Suns’ round 20 loss was their lack of effort, as they recorded less tackles than Melbourne despite having far fewer disposals. Carlton was beaten in the clearances, hit-outs and inside 50s by St Kilda, but the Blues’ clean ball-use and efficiency going forward proved to be the decisive factors.

You cannot question Carlton’s effort in the last month, but there is plenty of doubt surrounding the young Suns. One Blues midfielder who consistently gives his all is Ed Curnow, who has a very strong record against Gold Coast. Curnow has recorded over 30 disposals in his last two full-length matches against the Suns, which includes Carlton’s win against over the Suns earlier this season.

The improvement of Sam Walsh and Touk Miller throughout the 2021 season has been a joy to witness. Both rank top 10 in the AFL for disposals this year, each averaging over 30 touches per game. Walsh has recently added a match-winning element to his game, kicking seven majors in his last five matches. The no.1 draft pick from 2018 booted three against the Saints last weekend, so the $2 at Sportsbet for him to kick one against the Gold Coast is great value. Miller may find more of the footy on Saturday, but can he match Walsh’s influence in the forward half?

The Gold Coast Suns have a very bad habit of closing out their seasons horribly, failing to win a game in rounds 21 to 23 since 2017. The Blues easily won last weekend without a recognised ruckman, so they will survive even if Tom De Koning is ruled out. We think the Suns are in big trouble this week against the Blues, who can still make the finals with a good run home.

Ed Curnow to get 25+ disposals

Ed Curnow started his 2021 season in prime form, collecting 25 or more disposals in eight of his first 10 matches. He has since slowed down, averaging just 20 touches across his last six games. With a high average of 26 disposals from his last five contests against the Suns, we think Curnow is paying well overs to reach that mark this Saturday.

If the Blues are serious about playing finals, they will beat the Suns handily and pick up some much-needed percentage along the way. Ed Curnow enjoys playing the Suns and should thrive once again, while we think Sam Walsh will hit the scoreboard with another goal at Marvel Stadium.