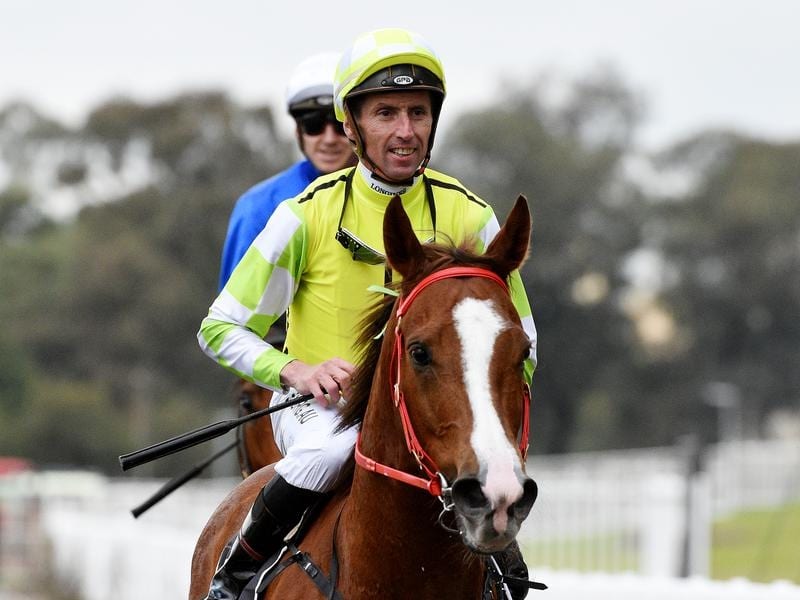 Former Victorian Eduardo has staved off a classy field to win the Missile Stakes at Rosehill.

Joe Pride is kicking up for two of his horses to be seriously considered for Everest slots after Eduardo maintained his perfect record for the trainer in the Missile Stakes.

Pride also has Group One placegetter Fasika as a potential candidate for the $15 million sprint and says Eduardo deserves to be in the mix.

“I want two slots, is that greedy?” Pride said.

“He is an exciting horse. Although he is a seven-year-old, I think in real terms he is much younger than that because he wasn’t broken in until he was three and there is plenty of racing left in him.”

A Group Two winner in Melbourne, Eduardo came to Pride at the start of his current campaign.

Renowned for his skill in rejuvenating the careers of older horses, Pride has now produced the gelding for successive wins in the July Sprint and Saturday’s Group Two Missile Stakes (1200m) at Rosehill.

It was Pride’s third success in the race after wins by Rain Affair in 2011 and again two years later.

In a field reduced to six by scratchings, Nash Rawiller aboard Eduardo ($2.30 fav) took control and the horse was game to the line to claim several high-profile scalps.

James Cummings just fell short of producing a two-state feature race double after winning the Aurie’s Star Stakes at Flemington with Home Of The Brave.

The Godolphin head trainer saddled up Flit ($4) and was thrilled with her effort to finish1-1/2 lengths away second after looming in the straight.

“Brilliant return from Flit but a clever ride from the winner,” Cummings said.

Cummings was happy he pulled the right rein by scratching Savatiano due to the heavy track and said she was likely to instead head to the P B Lawrence Stakes in Melbourne.

Imaging ($11) had limited galloping room in the straight and finished another long head away.

New Zealander Melody Belle went back to last and failed to threaten but jockey Kerrin McEvoy was satisfied with her return saying the race didn’t pan out for them.

“She pulled up having a nice blow. She just found that race a little bit sharp for her given the circumstances.”

Rawiller had a mixed day with a double aboard Desert Path and Eduardo soured by two suspensions.

He was outed for seven days for overuse of the whip on Desert Path and for seven meetings for careless riding on Eduardo.

The penalties will be served cumulatively, starting immediately and expiring on September 1, ruling Rawiller out of the Group One Winx Stakes meeting on August 22.