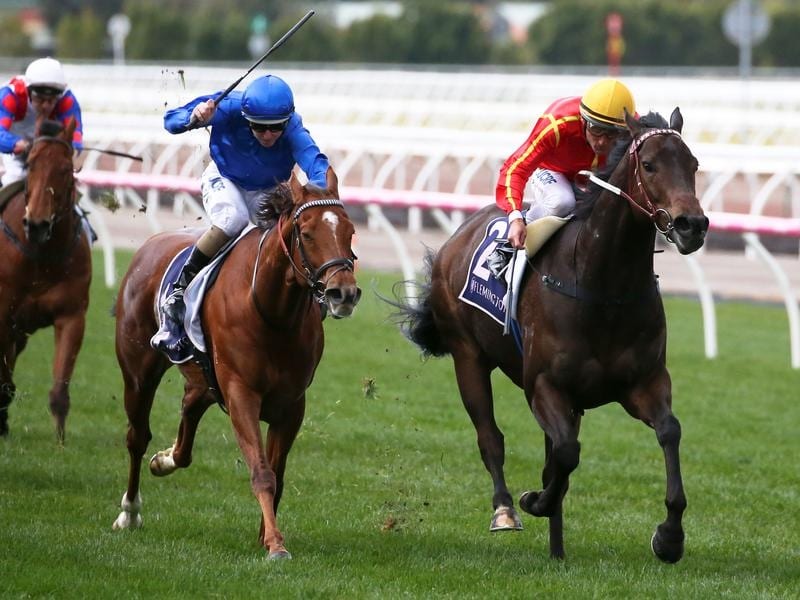 Home Of The Brave has delivered jockey Damien Oliver another win in the Aurie’s Star Stakes.

Champion jockey Damien Oliver has continued his recent domination of the Group Three Aurie’s Star Stakes, making it four wins in the past seven years and his fifth in total on Home Of The Brave.

Godolphin’s Melbourne stable foreman Sean Keogh said Oliver’s quick thinking at the start of the 1200m race secured the win as he had to overcome adversity after receiving a bump from Great Again, who was drawn to his outside.

“After that, he was able to get him to the outside where he got clear galloping room. He was very tough late, super win,” Keogh said.

Oliver was then able to stalk Great Again and run him down in the closing stages.

Oliver said his mount was sandwiched in the incident but added the horse didn’t jump well anyway and felt he was not overly disadvantaged.

Keogh said trainer James Cummings had set Home Of The Brave for Saturday’s race and got him ready in Sydney before sending him south.

Oliver felt the slow track conditions were perfect for Home Of The Brave, as was the tempo which built during the race.

The Aurie’s Star win completed a treble for the 48-year-old jockey who captured earlier races on the program aboard Fatigues and Cafe Rizu.

A former English sprinter, Home Of The Brave finished second in the 2018 Aurie’s Star Stakes to Voodoo Lad, the winner ridden by Oliver.

The nine-year-old gelding by Rosemont Stud’s stallion Starspangledbanner took his earning to almost $1.1 million with his latest stakes win.

The victory also completed a winning double for Godolphin and James Cummings as they had collected an earlier victory with Fatigues.