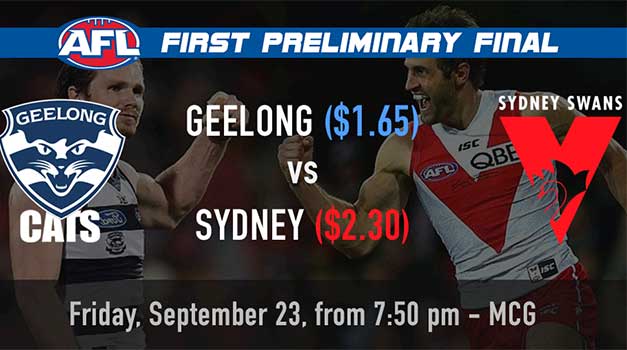 GEELONG is a hot favourite to advance to its fourth grand final in 10 years when it hosts Sydney at the MCG on Friday night.

The bookies have installed the Cats at odds as short as $1.60 after earning a week off following their qualifying-final win over old enemy Hawthorn.

Sydney on the other hand, has fallen out of favour with punters, with Crownbet putting them at the generous $2.30 mark.

The Swans rebounded strongly against Adelaide last week, after being dismantled by precocious cross-town rival GWS in week one of the finals.

Despite suffering several injuries and having just a six day break since the Adelaide game, the Swans will take heart from their 38-point round 14 win over Geelong at Shell Stadium.

The Swans were at their angry best that day as Keiran Jack inspired them with three goals in his 200th game, while Dan Hannebery and Luke Parker were prolific.

Patrick Dangerfield battled hard for the Cats but a greater spread of contributors through the midfield proved to be the difference between the two teams.

Head to head betting and tip

The Cats have a full squad to choose from and have the full confidence of punters, but is the result as clear-cut as the bookies are making out?

There is an air of the unknown about the Cats form-line having seen them in action just once since their August 27 flogging of Melbourne. You get the feeling Chris Scott wishes the round 23 bye had have been another hit-out with the coach putting his players through a bruising match simulation last weekend.

In contrast the Swans were sluggish against GWS in week 1 of the finals, but were producing consistently beforehand and bounced back strongly against Adelaide at the SCG, winning by 36 points last Saturday.

The big concern for the Swans is the six-day break, compounding their injury woes that have put Jarred McVeigh and Gary Rohan in doubt for the cut-throat clash.

The Swans greater depth through the midfield was pivotal in their home and away victory over Geelong, which has rectified the huge reliance on Dangerfield and Joel Selwood in recent times, with more players chipping in through the middle of the ground.

But I suspect if the Swans can quell the big two, the support cast may struggle against a very even Swans team. That is why I think the $2.30 on offer for the Swans at Crownbet is well worth a look.

Most goals betting – Cats vs. Swans

How can you look past Lance Franklin in this category? The Swans superstar was pivotal last weekend against the Crows and is simply a big game player.

He is a very short $2 (Crownbet) to kick the most goals, with Geelong spearhead Tom Hawkins his nearest competitor at $3.

If you are looking for something with a bit more value, last week’s Swans hero Tom Papley is paying $19. The youngster booted four goals last week, proving just as dangerous as his more storied teammate Franklin.

Dangerfield is paying a juicy $26 for most goals for the Cats, if the Swans get on top early expect the Brownlow medal favourite to be thrown forward at times. He is capable of anything and those odds…

Best bet: Patrick Dangerfield for most goals at $26 at Crownbet.

Crownbet has installed a very slim line for the clash and I see the Swans with a seven and a half point lead at $1.92 as a good value bet.

The match is likely to be low scoring with wet weather and windy conditions haunting Melbourne’s Spring and more expected to come on Friday night.

The battle-hardened Swans are not scared of hard work and the 7.5 point start could be enough to convince some to back them.