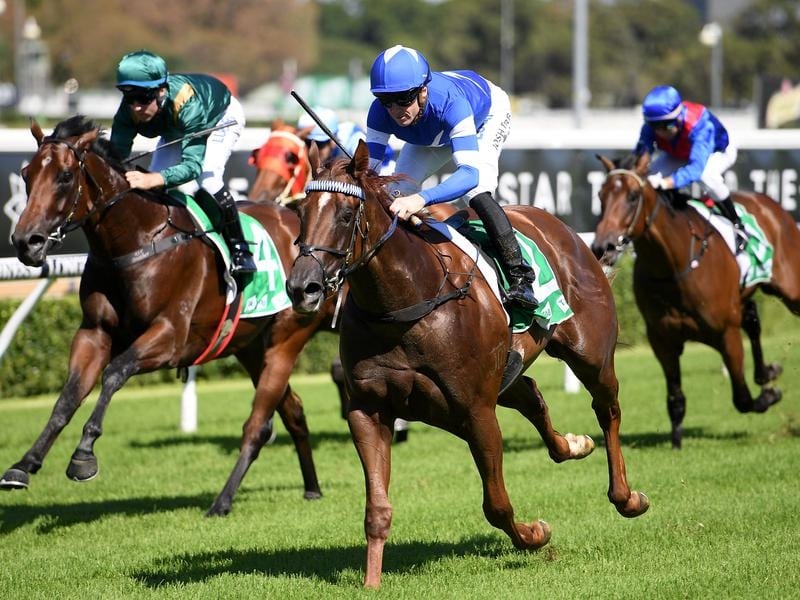 Deep Sea (blue) will be on an educational visit when he runs in the Dalrello at Eagle Farm.

Promising Sydney two-year-old Deep Sea will be on a learning curve when he makes his Brisbane debut at Eagle Farm.

Deep Sea scored a strong win at his only start on the Kensington track three weeks ago and trainer Mark Newnham earmarked a Queensland trip for him.

The gelding will meet a stronger field in the Listed Dalrello Stakes (1000m) at Eagle Farm but Newnham is looking forward to the gelding getting experience in stakes grade.

“I was looking for a 1000 metre race for him and this one has black-type so it suits,” Newnham said.

“It is obviously a tougher race but this will be a good learning curve for him.

“He will go up for the one run and then have a break. I think we will have a nice three-year-old next season.”

Newnham was a regular visitor to Brisbane when stable foreman for Gai Waterhouse and has already had success in the north since branching out on his own 18 months ago.

“I haven’t had many runners in Queensland but we won the Silk Stocking last year with Anatolia,” he said.

Newnham is considered a rising star in Sydney training ranks and his 94 winners to date include Group One victories with Maid of Heaven in the Spring Champion Stakes and Nakeeta Jane in the Surround Stakes.

He hopes to have more Brisbane runners as his stable grows.

Fellow Sydney trainer Gerald Ryan has scratched Covert Ops who drew the outside barrier in the Dalrello.

“He is speedy and he has recovered from a setback at his last start in Sydney,” Ryan said.

“But he is only a little bloke and I don’t want to knock him about,” Ryan said.