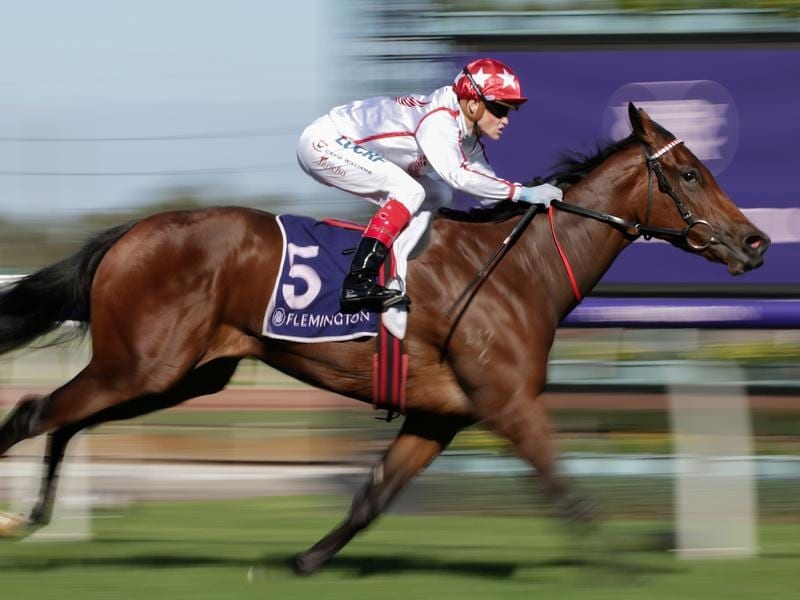 The progressive Archie Alexander-trained Chaillot has claimed the Anzac Day Stakes at Flemington.

Three months can be a long time in racing.

And in the case of two-year-old filly Chaillot, trainer Archie Alexander says her transformation and development in that time has been amazing.

Chaillot, a $25,000 yearling, has stamped herself as a genuine spring Classics prospect after a convincing win in Thursday’s Listed Anzac Day Stakes (1400m) at Flemington to remain unbeaten from two starts.

“I think she’s a proper filly and she’s shown that today,” Alexander said.

But that was not how the Ballarat trainer viewed the filly only a few months ago.

“Three months ago you would have given her away,” Alexander said.

“She wasn’t doing a thing. If you’d offered me five grand for her three months ago I would have taken it.

“She just had niggling issues, she was backward.

“She was struggling and then all of a sudden, probably two little gallops and she just grew wings.”

Alexander said Chaillot then trialled well, and the two-year-old has continued to improve to win both her starts.

After coming from near-last in her maiden win at Ballarat, Chaillot was sent out $6 second favourite in Thursday’s 1400m-race with the previously unbeaten colt Super Seth odds-on.

Super Seth ended up taking up the lead with Chaillot settling just off the pace before making her winning run in the straight to defeat Deserved by 1-3/4-lengths with Super Seth another three-quarters of a length away third under 59kg.

The Anzac Day Stakes has been won in recent years by subsequent Group One winners Long John (2013) and Merchant Navy (2017) while last year’s winner Vassilator was second in this season’s Caulfield Guineas.

Having secured a valuable stakes race win, Chaillot will have a spell with the Group One Thousand Guineas (1600m) among her spring aims.

“This is a good race. She has won well. You couldn’t not aim her for the Guineas now,” Alexander said.

“When she arrived here today I just looked at her and thought, ‘this is a proper filly’ because she has trained really well, she was relaxed, she was happy and she looked really well.

“I actually said to the owners I was worried she was a little bit heavy coming here, as in she was doing too well.”