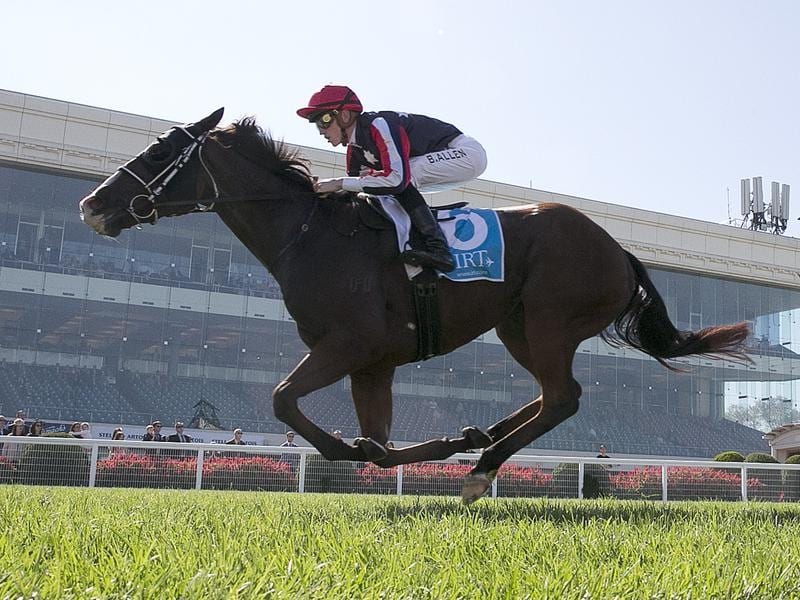 Adelaide horse Waging War will be back at Caulfield to defend the rich VOBIS Gold Mile.

Widgee Turf was coming off success in the Victoria Handicap at Caulfield’s Easter meeting with Waging War the fresh horse on the scene.

Again Waging War is the fresh horse, having raced twice since the spring.

On Saturday Widgee Turf, off the back of a Flemington stakes race win last month and a 10th in the Doncaster Mile at Randwick, has been well supported to make amends for last year’s defeat firming from $1.80 to $1.65 while Waging War is the second pick at $5.

Waging War returned with a fast-closing second to Snitzkraft in the Matrice Stakes at Morphettville on March 11 before finishing sixth behind Antah at Bendigo on March 30.

Andrew Gluyas, who trains in partnership with his father-in-law Leon Macdonald, said it would be a nice feat to score back-to-back wins.

“It was an exciting first-up effort but then the Bendigo run, it was only just an effort, but he’s third-up at the mile with a bit of a break in between.

Waging War returned home after his Bendigo performance and Gluyas said the team had considered a start in Adelaide.

But they felt Saturday’s race, with its rich prize money, fitted his campaign with the Adelaide carnival approaching.

Gluyas said he and Macdonald were looking at the Robert A Lee Stakes (1600m) at Morphettville on May 18.

“He looks like he’s really come on since Bendigo and we’re hoping he runs well,” Gluyas said.

Waging War arrives in Melbourne on Friday morning and will be stabled at Caulfield with Andrew Noblet ahead of Saturday’s race.