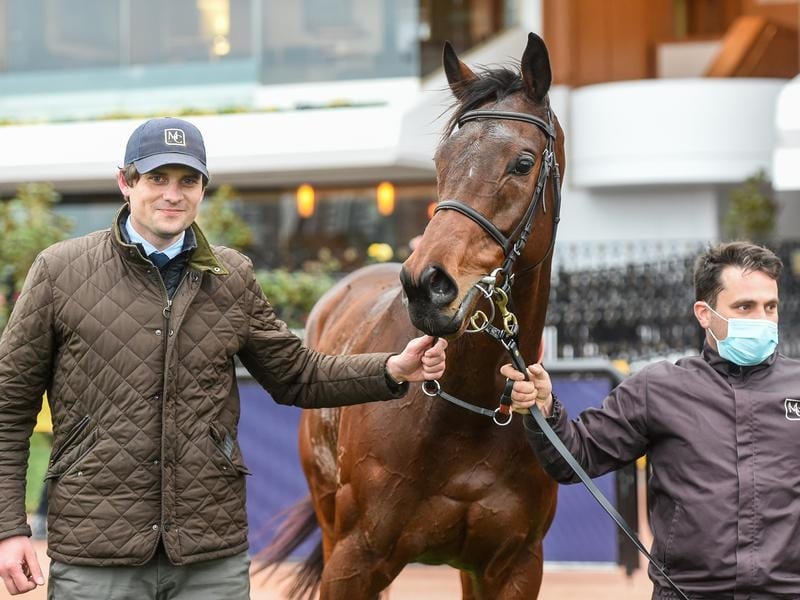 Trainer Matt Cumani (left) is optimistic Creedence can step up in class during a spring campaign.

Trainer Matt Cumani hopes to turn Creedence into a spring performer after the stable newcomer showed his credentials with a strong winter campaign.

Creedence had three starts for Cumani after joining the Ballarat stable in early June, winning twice at Flemington, and now the trainer is hoping the gelding can be competitive against tougher spring opposition.

But first Cumani is giving Creedence a short break with an eye to having the gelding back on the racetrack towards the end of August.

Creedence turns six on Saturday and the connections of the gelding see this year as potentially the final chance at having a shot at the spring.

“He’s not a spring chicken and the owners are pretty keen to have a go at the spring,” Cumani said.

“And he seems to have done enough to suggest he might be up to that level.

“I haven’t got time to give him a proper spell, but we can give him a little bit of a let-up without having to gallop him.

“If we get good weather we’ll stick him out on the grass, but it’s hard to see us getting many particularly good days but we can go out and do something different.

“We’ve got the old hill track, we can do a bit of dressage, jump some little poles, just do something else, so long as we’re not galloping and give his mind a break.”

Cumani said the Listed Heatherlie Stakes (1700m) at Caulfield on August 29 could be a race on Creedence’s radar, but added a 2040m race at The Valley a week earlier may be looked at.

A longer term target is the Group Three Naturalism Stakes (2000m) at Caulfield in September, a race that provides the winner a start in the Caulfield Cup.

“We could look at a race like the Heatherlie or if we don’t want to drop him too much in distance there’s an open handicap at The Valley in the penultimate weekend in August and then we’ll see where he takes us,” Cumani said.

“But I’d love to have him in a race like The Naturalism.

“I think that would be a great spot for him.”