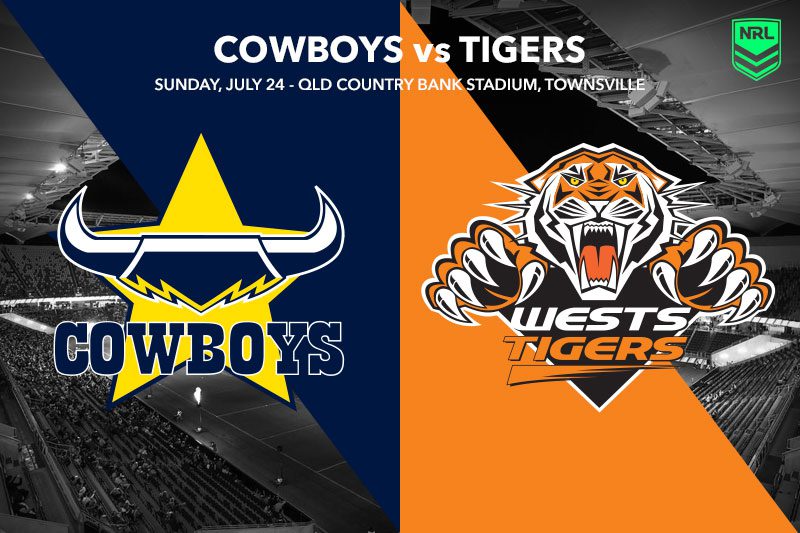 The North Queensland Cowboys will look to continue their golden season when the Wests Tigers travel to the tropics for Sunday afternoon NRL action.

The Tigers are out of the finals race well and truly, but the two points are far from irrelevant given they are locked in a battle for the wooden spoon with the Gold Coast Titans.

The Cowboys were forced to back up just 48 hours after having a huge contingent play in an epic State of Origin decider, and the Sharks took advantage of that.

Don’t expect the same thing to happen this week. The Cowboys are an unbackable $1.08 in the head-to-head market with almost their best available team set to take the field.

Jordan McLean is still missing with a hamstring injury as well as Reuben Cotter, but their backline is at full strength and that should mean plenty of points.

This game for the Cowboys isn’t so much about the two points on offer, but more about what we can learn about them moving forward.

If they turn up in front of their home fans and dish out the hiding many expect, it will confirm a lot of what we believe.

If they turn up flat and even potentially lose, concerns will be raised around the proverbial wall that a lot of teams in the past have run into post-Origin.

It’s a factor they’ve not dealt with in many seasons now, so even if the Tigers are sub-par opposition, there is still a test in front of them.

Murray Taulagi on his return from COVID-19 is just $7.25 with Ladbrokes to score the first try, and we think he is a good thing on the left wing to convert that into a win for punters.

The Tigers will get a look to their future with Tim Sheens taking the reins from Brett Kimmorley, who is unavailable to coach due to COVID-19 protocols.

It will be just shy of 10 years to the day when Sheens was sacked as Tigers coach back in 2012, so fans might be forgiven for thinking they’ve ended up going into a time machine.

It’s been a disastrous season for the Tigers and they’re onto their third head coach for the year, which hasn’t been done since the 2014 ASADA-effected Cronulla Sharks.

A $7.75 price tag in the head-to-head betting looks more like a 2021 betting market than this season, but when you see the teams on paper it become apparent they’re pushing you-know-what uphill.

David Nofoaluma has dropped back to the reserves in favour of Brent Naden on the wing, which feels like deckchairs on the Titanic, but Naden does offer a bit of value at $3 to crash over for a try. It isn’t often a winger is at that price, so why not take a throw at the stumps?

Luciano Leilua secured an immediate release from the Tigers a few weeks ago to take up his new contract with the Cowboys and there could potentially be a running battle in the middle with the likes of Joe Ofahengaue. While the former Bronco is having perhaps his best season in the NRL, Leilua will be super keen to return to his tryscoring ways and get one over the Tigers’ middles. The $6.20 for the Samoan international to crash over against a team that has no interest in doing the tough stuff is sensational value.

The Cowboys should win with ease and run up the score. The 13+ margin feels like a fait accompli.

Why not roll that margin bet into Luciano Leilua, Valentine Holmes and Murray Taulagi to all score tries? That four-leg combo pays $23.10 with Neds.