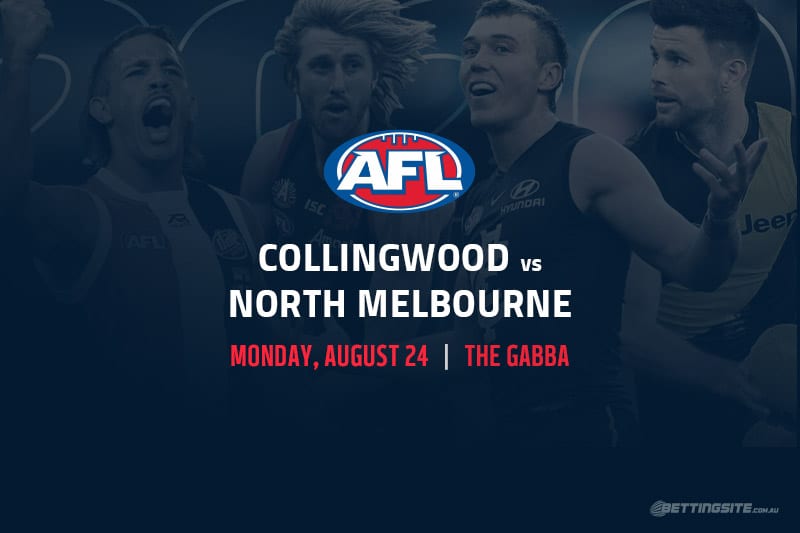 The pressure gauge will reach critical levels for one of these teams when the Collingwood Magpies and North Melbourne Kangaroos go head-to-head at the Gabba on Monday night.

Shocking form and a growing injury list have seen the Pies slip from premiership favouritism to the lower reaches of the top eight, where they start the round only half a game clear of the 10th-placed Western Bulldogs.

Rhyce Shaw’s Kangaroos showed promise early in the season, but they have won just one of their last 10 matches to drop to 17th on the AFL 2020 ladder.

Injuries rattled the Magpies again last week as Ben Reid suffered another hamstring blow and Brody Mihocek copped a sickening head knock, although the latter has been cleared of concussion and is an outside chance to retain his place.

Robbie Tarrant was a late out for North Melbourne ahead of the narrow loss to the Brisbane Lions, but the star defender will return this week alongside Ben Brown as the Roos regain some experience in their spine.

The Kangaroos beat the Pies comfortably last year and nearly sprung a big upset last week, so they may sniff an opportunity to heap even more woe on Nathan Buckley and co.

Premium midfielders like Scott Pendlebury destroy North Melbourne, as the Roos’ tagging efforts of late have not phased the best in the business. Pendlebury has amassed over 30 touches in three consecutive games against North, including 33 in the loss last year. The Collingwood skipper has passed the 25-disposal mark in six of his eight games this season, so the $1.91 looks decent value.

The Pies missed the speed and class of Stephenson last week, as their forward six only kicked four goals between them. In his one match against North Melbourne, the 2018 Rising Star kicked three goals and was very effective around contests. The Roos will struggle to match Stephenson on a lead or on the ground if he’s switched on, which he should be when he returns to the side this week.

The last game between these sides was an overwhelming victory to the Roos, who won by a massive 44 points. While they have found wins hard to come by this season, Shaw’s mob could be dangerous if they bring the same effort that saw them get within a point of the Lions. Buckley’s Pies haven’t won comfortably in weeks and might lack the cattle required to put up a big score.