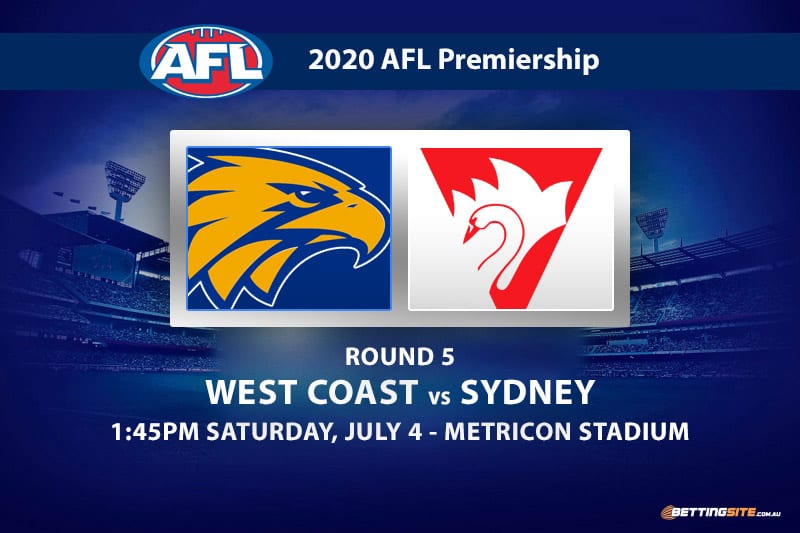 The West Coast Eagles were slated to play Richmond this week, but Queensland’s new quarantine measures have forced the AFL to send the Sydney Swans up to the Gold Coast instead.

Adam Simpson and John Longmire played four seasons of footy together at North Melbourne and were both champions of the club, but they go head-to-head as rival coaches at Metricon Stadium this Saturday.

Neither team has made a good start to the 2020 AFL Premiership season, with the Eagles winless in their resort hub and the Swans with just two wins overall.

All-Australian defender Jeremy McGovern will return for West Coast after his recent suspension and ankle injury, while Sydney will need to bring in some height to replace the injured Sam Naismith.

The spark has gone out of this rivalry since the heady days of the 2005 and 2006 grand finals, but a big clash to start Saturday’s matches could reignite it.

The Eagles midfielder that needs to lift more than anyone else is Elliot Yeo. The ex-Lion is struggling to find the ball this season, topping 20 disposals in a match only once. The Swans have a strong midfield, but Yeo beats them all for pace and should use that advantage to find plenty of outside ball.

Although the Swans suffer from a lack of productive forwards, Isaac Heeney displays great playmaking skills every time he pushes up the ground. John Longmire will need to make the choice again this week, but we think he has to give Heeney more time on the ball if the Swans are to have any chance against West Coast’s star-studded midfield.

Kicking four of the Eagles’ six goals against the Power, Josh Kennedy looked like the only capable forward in the squad. His signature marking ability and leading patterns were unsighted in the first few weeks, but now Kennedy looks warmed up and ready to play. We like the big forward for the first goal against the Swans as they don’t have the strongest key defenders in the league.

We back in Tom Papley every week to kick a few goals and he is yet to disappoint us. We are taking the little goal machine again after his four-goal effort against the Western Bulldogs. Even though he sits second in the Coleman Medal race with nine goals in three games since the restart, Sportsbet are still offering $2.30 for Paps to kick two majors.

West Coast hasn’t scored over 50 points since entering the hub in Queensland, but Sydney hasn’t kept any team below 60 points this season. We value the work Adam Simpson puts into his Eagles and believe he can turn their situation around with a good performance this week, while the Swans are also solid in the scoring department and should perform just as well.

Picking a winning margin is never as straightforward as it seems, but the West Coast 1-39 market is very forgiving and is the right choice for this match. The combination of Luke Shuey, Andrew Gaff, Tim Kelly and Elliot Yeo cannot lose four straight matches, especially since Nic Naitanui will be against Callum Sinclair in the ruck.