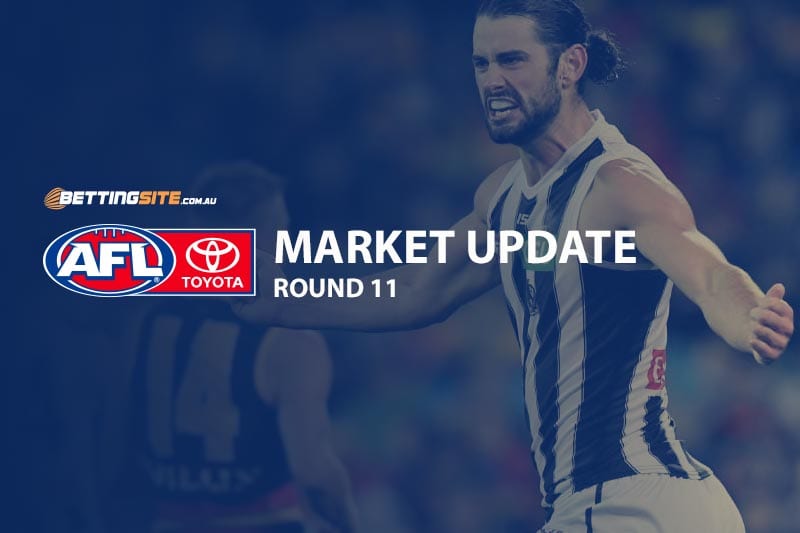 Intensity in the AFL has risen over the past few weeks as the bye rounds are only a week away. Round 11 will follow the standard formula of one Friday night match, five Saturday matches and three Sunday games, making for a great weekend of footy.

Following the immediate departure of head coach Brad Scott, North Melbourne will host Richmond at Marvel Stadium. Despite ongoing injuries, the Tigers sit in the top four and enter this match as $1.28 favourites at Sportsbet.com.au, with the Roos outsiders at $3.50.

The first Saturday clash will be between red-hot Collingwood and last week’s one-point after-the-siren winners, Fremantle. Although Michael Walters won the Dockers last round’s match, they are still paying $4.60 against the $1.17 Magpies, who are looking for their eighth win on the trot.

The two expansion clubs will face off in Sydney with the GWS Giants looming large at $1.06, leaving the Gold Coast Suns at $8. GWS has won four of its last five, whilst the Suns have lost six matches straight.

Just when the Sydney Swans were back in form, they failed to beat Collingwood and will now face the Cats in Geelong. Entering the match as $1.13 favourites, the Cats are not worth touching, but the $5.40 Swans are just as unattractive.

Even though they sit inside the top eight and only lost last week by a single point, the Brisbane Lions are paying $1.61 at the Gabba against ninth-placed Hawthorn. The Hawks, who beat Port Adelaide in Tasmania last time out, will enter this clash with $2.25 odds. Brisbane is the value bet of the round so far.

Concluding Saturday’s games will be the Melbourne and Adelaide clash at the MCG. The two big cities will face off with the visitors as $1.76 favourites, leaving the Demons with the $2.05 price on their home deck.

Two of the most interesting teams in Australia will battle in a completely different continent when St Kilda and Port Adelaide play in Shanghai. The Power are favourites at $1.44 and the Saints are currently $2.65. The winner will be whoever is least sick when the games begins.

Eternal rivals Essendon and Carlton go head-to-head this Sunday afternoon. The $1.38 Bombers have now lost both Jake Stringer and Dylan Shiel to hamstring injuries, with both likely to miss this match. Blues fans may have something to look forward to this week as the $2.90 outsiders always put up a fight against the Dons.

Finishing Round 11’s action will be the two western sides, West Coast and the Western Bulldogs. The 2018 premiers have been excellent at times but also inconsistent, similar to the Bulldogs. With $1.20 odds, the Eagles are worth adding to a multi, whilst the $4.20 Doggies are long shots away from home.

The AFL outright betting market is now a five-horse race. Geelong is still in the lead at $3.50, followed very closely by the $3.75 Magpies. Greater Western Sydney has come into third place with $6.50. Richmond ($7) and West Coast ($8) round out the contenders.