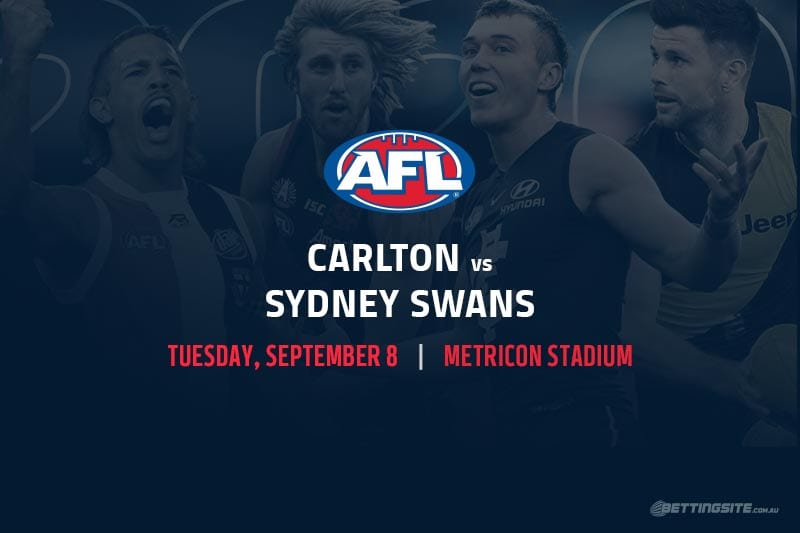 The penultimate match of round 16 sees the 12th-placed Carlton Blues face the 15th-placed Sydney Swans on Tuesday night at Metricon Stadium.

Carlton are coming off another close encounter where they led the Giants for three quarters before running out of gas in the final term.

Meanwhile, Sydney set a cat amongst the pigeons in regards to the top eight when they got the better of Melbourne on Friday night in Cairns.

This is a must-win game for the Blues if they want to keep their finals hopes alive, but the Swans showed plenty of signs against the Demons to suggest they will be no walkover.

This seems like the sensible play in the first leg of our same-game multi, as Carlton were ultra impressive for the first three quarters against the Giants. If they can bring that for four quarters against the Swans, they should get the job done. However, in their past seven games, the Blues have only kicked 12 goals combined in the second half. If they can get a start on the Swans, we’re hoping they can hold on this time around.

Jack Martin seems to have settled nicely at Carlton, and the Swans look a perfect matchup for the talented half forward. Despite only kicking one goal in his last four games, the stage is set for the former Gold Coast Sun to help lift his side into finals calculations on Tuesday night. Sydney are undermanned in defence, so Martin may find a few more opportunities inside 50 than he normally would.

One of Sydney’s brightest prospects, Nick Blakey has lifted his output in the past month since moving from deep forward to a freer role further up the ground. At these odds, it is extremely hard to pass up on him kicking a goal. Blakey averages a goal every other week and didn’t trouble the scorers against Melbourne last time out, so the form says he is due.