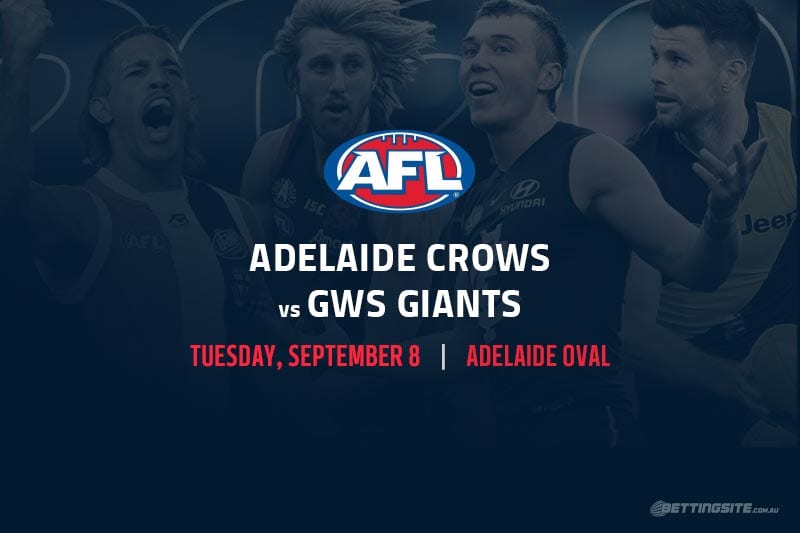 Can the Adelaide Crows pull off back-to-back wins when they host the GWS Giants at Adelaide Oval this Tuesday evening?

It took 15 rounds for Matthew Nicks and the Crows to get their first win of 2020, but they’re hungry for more with three games remaining in the season.

Leon Cameron’s Giants sit eighth on the AFL ladder after their win over Carlton, but they can finish as high as fourth or as low as 15th depending on how the last few rounds pan out.

Jake Riccardi has made a big splash in his first three matches, kicking eight goals and providing another marking target inside 50 for the Giants.

The Crows put on a clinic against the Hawks in their best performance of the year, and they need to emulate that same energy against GWS if they want to cause another upset.

With eight games under his belt since returning from shoulder surgery, Tim Taranto is building back to his prime. The 2019 GWS best and fairest had 25 touches against the Dockers and 17 in a low-disposal clash with the Blues. Having collected 36 possessions against the Crows last year, Taranto likes the matchup in the middle and should put 20 disposals together.

Does any player make a bigger difference to a team than Toby Greene does to the Giants? The combative forward can take contested marks, tackle well, create opportunities and convert his set shots accurately, while he is also an accomplished ball-winner in midfield when required. Greene is a class above the Adelaide defenders and will tear them apart if he gets the service.

Coming to the pointy end of the season, the Giants are in a position where percentage could play a huge part in where they finish on the ladder. Their forwards have all started to show form in recent weeks, so we are backing last year’s grand finalists to rack up a big win against the improving but outclassed Crows.