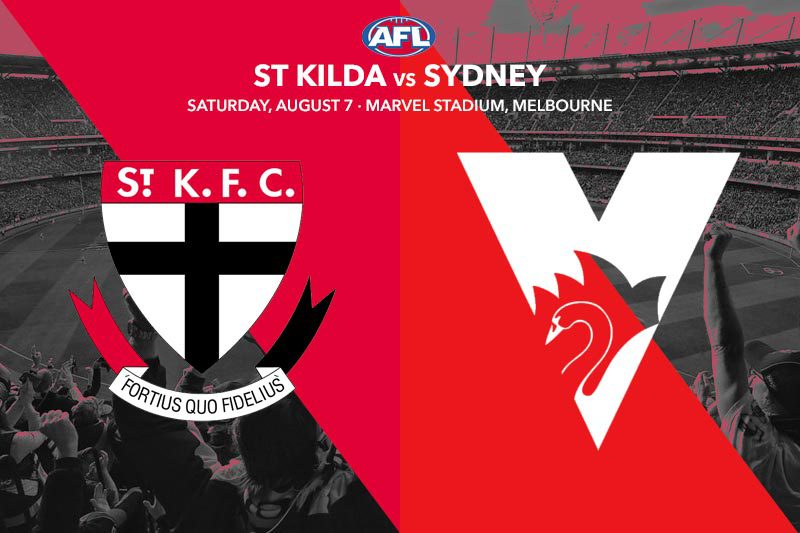 The struggling St Kilda Saints will host the in-form Sydney Swans at Marvel Stadium this Saturday night in round 21 of the 2021 AFL Premiership season.

Brett Ratten’s men have lost their last three matches on the trot, which has seen the Saints drop to 13th position on the AFL ladder. In contrast, five straight wins have John Longmire’s Swans within touching distance of the top four.

The Saints have taken a huge hit to their backline, with full-back Dougal Howard (hamstring) and half-back flanker Hunter Clark (concussion) both sidelined.

Another week of injury-free football has given Sydney the option to enter this match unchanged, although James Rowbottom and Chad Warner could return to the midfield this weekend.

The loss of Dougal Howard will have a massive impact in the back half for St Kilda, as the former Port Adelaide defender has not missed a game since moving to Moorabbin at the end of 2019. Oscar Clavarino is Howard’s most likely replacement given his size, but it could be a tough week for the three-game youngster against a red-hot Lance Franklin.

The Sydney Swans apply elite pressure on their opposition and often cause dangerous turnovers that allow them to quickly transition and score heavily. Will Hayward is a smart forward who is quick to act in those situations, while his conversion rate in front of goal (23.7) ranks among the best in the AFL this season. Hayward kicked 3.2 against St Kilda back in round 12, so the Saints will be well aware of the threat he poses.

Both the Saints and Swans like to get the ball into the hands of their best distributors, and the delivery of Brad Hill and Jordan Dawson is sure to stand out under the roof at Marvel Stadium. While Hill has endured an up-and-down season, Dawson has elevated his game and is averaging 24 touches per match since the Swans’ bye in round 14. The young Swan has played all 19 games this season and only dropped below 20 disposals three times, making him an excellent option to get 25 or more touches in this contest.

The Swans have won 11 of their last 12 matches against the Saints, while they come into this clash on a five-game winning streak. The loss of Dougal Howard will be very hard for the Saints to cover, especially this week against Lance Franklin. We expect the Swans to easily win this contest and make it six in a row.

Will Hayward to kick 2+ goals

Will Hayward has kicked a goal in each of his last 10 matches, including six outings with multiple majors. His best return in front of the goals so far this season came against the Saints in round 12, and he looks a good chance to deliver something similar this weekend.

Back in the Swans to register a big win over the Saints at Marvel Stadium this Saturday night. Will Hayward is in good form and should have a few chances on goal, while Jordan Dawson is a sound bet to gather 25 or more disposals.