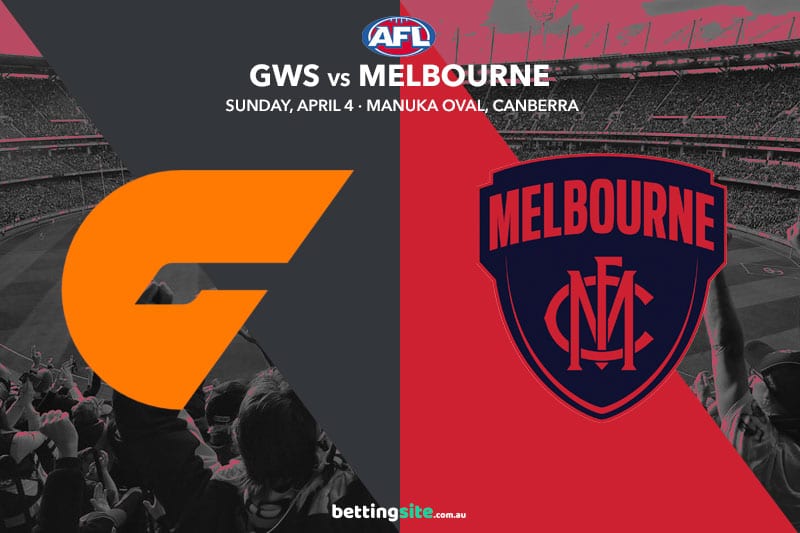 On Sunday afternoon the winless GWS Giants take on the undefeated Melbourne Demons at Manuka Oval in what shapes to be a pulsating contest in round three of the 2021 AFL season.

The Giants were horrendous against the Dockers last week over in Perth, putting in a performance that did not indicate a football club that competed in an AFL Grand Final only 18 months ago. GWS came through the defeat injury free but lost Sam Reid to a two-week suspension. Thankfully for the Giants, Jake Riccardi should return to bolster a forward line that only managed to kick seven goals against the undermanned Fremantle defence.

Melbourne came through their 18-point win against St Kilda with a clean bill of health and will prove awfully hard to crack come Sunday afternoon. That result will have given the Dees a welcome confidence boost for the trip to Manuka Oval, where the Giants have an impressive record. With a strong back six and a midfield led by Max Gawn, Clayton Oliver and Christian Petracca, the Dees will take a power of beating.

Last week Max Gawn dominated St Kilda’s young ruckman Paul Hunter, racking up 17 touches to go with 40 hitouts against Hunter’s lowly 13 taps. Gawn now comes up against the third-gamer Matthew Flynn, who has shown signs over the first fortnight of being a more than capable player around the ground. However, coming up against Gawn is different kind of challenge altogether. If the Giants are to have any chance on Sunday afternoon, Flynn will need to play the game of his life to make sure Melbourne do not constantly get first hands on the ball. With Gawn having midfield bulls like Oliver, Petracca and Brayshaw at his feet, the Giants midfield will need to put in a full four-quarter effort to be a winning chance.

Every man and his dog has sunk the boots into the Giants this week, and rightly so. With plenty of heat aimed towards Leon Cameron, we expect GWS to bounce back in Canberra. Stephen Coniglio has struggled to maintain his usual high standards since taking on the captaincy 12 months ago, and he was only decent at best against St Kilda and Fremantle in the opening two rounds of the season. If the Giants are to have any chance, they need a big game from their skipper. With odds of $3.75 available at top online bookmakers for Coniglio to have 30 or more disposals, we are backing him to have a big one at Manuka Oval this Sunday.

Melbourne set up the win against St Kilda last week with three goals to one in the third term, and they maintained that advantage until the final siren despite some inaccurate goalkicking. A big part of that win was a strong defensive effort led by Steven May, who has bounced back from a horror first season with the Dees to establish himself as one of the best key defenders in the competition. May finds plenty of the ball in the back half, having started the year off with 24 and 23 touches, the $2 on offer for him to gather 25 touches this Sunday is hard to ignore.

If the Giants dish up the same performance they did over in the west, Melbourne could easily smack them by 40+ points. We are expecting a more dignified performance from GWS, but it is hard to see them toppling the in-form Dees. Melbourne should be playing finals football this year, and if they are to do so, then they need to beat the Giants at Manuka.

Josh Kelly to score a goal

If you get paid $6 million over the course of a contract, you need to put in decent performances week in, week out. However, to begin the season Josh Kelly has struggled to regain the form that saw him land such a deal. When Kelly was at his best he was constantly hitting the scoreboard, and he is yet to do that this year, but we expect him to change that this weekend.

The Giants should put up a gallant effort on Sunday led by their senior core, but we expect Melbourne to have a touch of class to get them over the line at Manuka Oval. We are backing the Dees at the 1-39 margin into Steven May for 25+ disposals, Stephen Coniglio for 30+ disposals, and Josh Kelly to kick a goal at any time.