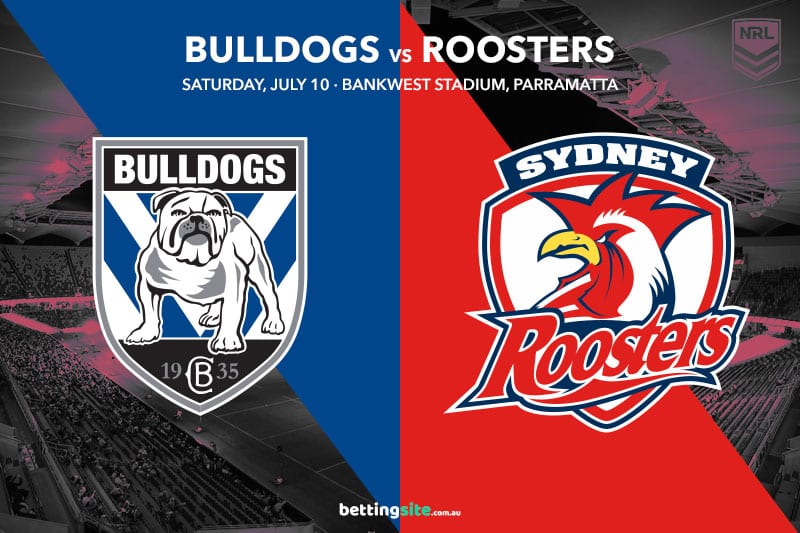 Sydney may be in lockdown, but the show goes on as the Canterbury Bulldogs host the Sydney Roosters at Bankwest Stadium on Saturday night in Round 17 of the 2021 NRL season.

All the eyeballs of the NRL community will be on this game as Super Saturday is cut by two thirds for the final time in 2021, and the overriding question will be how Canterbury bounce back from losing 66-0 to the Sea Eagles less than a week ago at the same ground. The Bulldogs will get the ‘Bondi Five’ back into the line-up to provide some experience, while Kyle Flanagan will remain at five-eighth outside of Jake Averillo.

The Roosters will be buoyed by the return of Victor Radley to the starting side as well as young gun Billy Smith, who has battled serious knee injuries over the past 24 months. The Roosters have struggled in recent weeks but are still giving up 22.5 points at the line.

When a team scores zero in the preceding week, it is hard to figure out where they will find their points. The +24.5 line wasn’t anywhere near enough of a head start against Manly, and it is looking as though the +22.5 line this Saturday will prove to be too short as well.

That said, Jake Averillo shapes up nicely as an anytime tryscorer option for Canterbury because of his pace off the mark and his willingness to challenge the defensive line, while Tuipuloto Katoa on the left wing is one to look out for also. Katoa will be marked by Matt Ikuvalu, who is prone to making some bad decisions when coming out of the defensive line.

The Roosters also failed to score a point in their loss to the Storm, but such is the quality compared to the Bulldogs, they should have no issues scoring points this week. Against the top sides it appears as though the Chooks don’t quite have the horses to go with the best, but the likes of Sam Walker, Joseph Manu, Victor Radley and Jared Waerea-Hargreaves have too much class and muscle for the Bulldogs.

Daniel Tupou is the $6.50 favourite to score the first try and should be backed, but Billy Smith at $14 would be a fairytale outcome not just for the man himself, but for the punters who back him at that juicy price. The Bulldogs’ last three losses have been by margins of 26 points or higher, so why not take on the -22.5 line for an easy $1.90 return?

Victor Radley is the key to the Roosters playing clinical football in attack, and it is up to Bulldogs skipper Josh Jackson to stop him. Radley opens up space for Sam Walker to operate, so Jackson has to take it upon himself to follow the Sydney lock around and cut down his time with the ball. If Radley is able to dig into the line with momentum, the Roosters will run riot, but if the Bulldogs and Jackson in particular can get up in their face, they can make it a tough afternoon for them.

The Roosters will win in a canter and cover the line. Sam Walker will be back to his best despite carrying a shoulder injury, as he will have time and space to work his magic thanks to the Bulldogs not being the Storm and Victor Radley returning and playing a lot of first receiver.

The Roosters at the line with Daniel Tupou to score the first try and both Matt Ikuvalu and Sam Walker to cross at any time can get you a nice $33 price at Sportsbet.