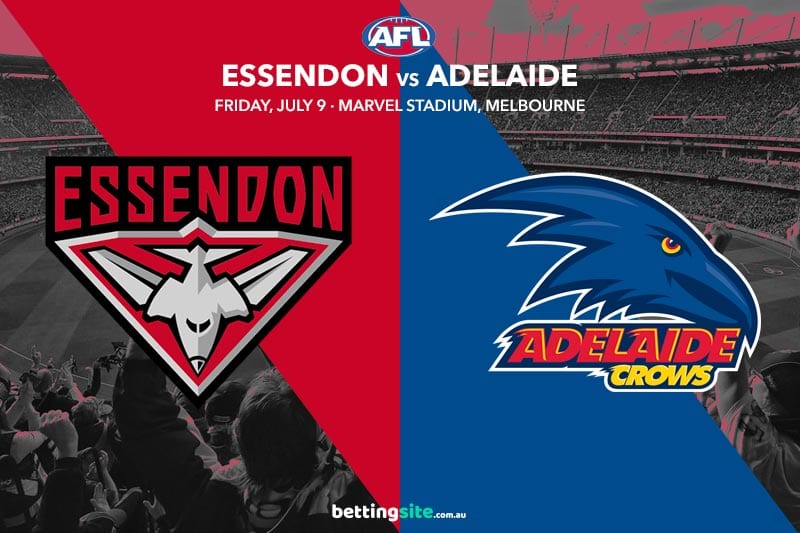 The exciting Essendon Bombers will host the Adelaide Crows under the Friday night lights at Marvel Stadium in round 17 of the 2021 AFL Premiership season.

Both the Bombers and the Crows have exceeded expectations this year, especially the Dons, who can still make the finals with a little luck.

The Crows have lost four of their last five contests and will struggle on the road this week if Taylor Walker is unable to play, as the former captain was subbed out in round 16 with a neck issue.

A huge injury blow will force the Bombers to make an unwanted change at the selection table, as their skipper Dyson Heppell has been ruled out after undergoing minor finger surgery this week.

Tom Lynch impressed in the SANFL with three goals last week and could return for Adelaide, while the likes of David Zaharakis and Matt Guelfi will be in the mix for Essendon.

The Bombers got off to a very quick start against Geelong last round with the first four goals of the match, but they faded as the game wore on and eventually went down by 41 points. The Adelaide Crows were horrible after half-time, as the injury to Taylor Walker dried up their scoring. This will be a very tough game for the Crows to win if their key forward remains ruled out.

The Dons have got great value out of their young players this season, as Nik Cox, Archie Perkins and Harrison Jones have been excellent. Cox and Perkins look like they need a rest, but Jones has kicked 16 goals from his last nine matches. At $2.50 with Sportsbet, Jones offers the best value of Essendon’s main forwards to kick two or more majors.

Speed is going to be the main offensive weapon on the quick Marvel Stadium surface, and the two players that come to mind are Nick Hind and Paul Seedsman. Seedsman has moved from half back to the wing this season and is flourishing, while Hind is still playing his best footy out of defence.

We think Hind could shine this week while Dyson Heppell is injured, as the former Saint may have more freedom in the backline. Hind will enjoy flying solo out of defence this week and rack up plenty of handball-receives and disposals.

Essendon to win by 25+ points

The last three contests between Essendon and Adelaide have been won by the Dons, who beat the Crows twice in a row at the Adelaide Oval in the last two seasons. Jake Stringer is in close to career-best form and will tear the Crows apart both in the middle and when he drifts forward. The final margin could easily blow out beyond 40 points by the end of the night.

Nick Hind to get 25+ disposals

Nick Hind has been electric off half-back since moving from St Kilda to Essendon, averaging 23 disposals per game this season. Hind has surpassed the 25-disposal mark five times this year, and we think he offers great value to pass that mark this week as the chief playmaker out of the Essendon backline.

We are backing in the Bombers to play a complete game against the Crows this Friday night at Marvel Stadium, with Hind and Jones starring at their respective ends of the ground. These three legs combined can get you a $9.75 return at Sportsbet.