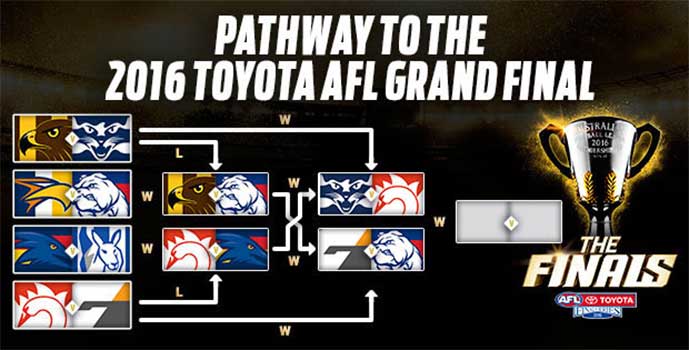 THERE are just four teams remaining in the 2016 AFL finals series and Sportsbet.com.au is unable to separate the GWS Giants and the Geelong Cats at the top of the market, placing both at $3.

The Sydney Swans are the next best in the market at the $4.25 mark while after being in double figures for the majority of this year’s post-season the Western Bulldogs are at the $6 quote.

It is a case of ‘out with the old and in with the new’ in the AFL as the GWS Giants look to take the Hawks’ mantle at the top of the AFL tree in their maiden finals series appearance.

The GWS are full of confidence and their coach Leon Cameron said his team can ‘absolutely’ win this year’s premiership.

“We’re sitting in the top four, we get the double chance, where that takes us to, I believe our players can go all the way,” Cameron said.

“In saying that we have a hell of a lot of work to do before that.”

On the red and white side of the harbour town the Swans are counting the cost of their pyrrhic victory over the Crows on Saturday night.

In some positive injury news for John Longmire, big man Kurt Tippett is in line to make a remarkable recovery from a broken jaw he sustained in the qualifying final loss to the Giants a fortnight ago.

The Swans may be wounded heading into the preliminary final against Geelong but midfield general Josh Kennedy said his team will take confidence from the fact they easily accounted for the Crows after a short turnaround.

“It’s a prelim final and I think one of the features of our team this year has been the guys that have been able to come in and play a role,” Swans midfielder Josh Kennedy said.

“It was certainly a tough game, certainly pretty exhausted by the final siren. They were in a similar position Adelaide. You’d play after a three-day break going into a prelim final, everyone’s sort of walking on cloud nine at the moment.”

Let’s face it, we all love a flutter on Brownlow medal night, but how often do we look at the odds – especially over the last two years – and think it is not even worth investing given short the odds are on the potential winner?

Sportsbet.com.au is telling you to put your money where your mouth is.

Sportsbet has opened up its page Brownlow Prophet page, which puts the power back into the punter’s hands.
Simply conjure up the Brownlow medal bet you want to make – which can be absolutely anything you can think of – and the team at Sportsbet will give you the odds they think your bet is worth.

The team here have been singing Alex Rance’s praises all year as a polling chance, given how spectacular his 2016 season was, so we enquired what price we could get the Tiger defender to poll 10 or more votes.

Sportsbet.com.au offered us $3.50 and we are happy to take that, but if you have an outlandish bet in mind that you know the other bookies will not offer, take advantage of the amazing opportunity to attach some odds to your Brownlow medal theory.

Are the Giants set for a reign at the top?

The Giants may already be sitting at the head of 2016 premiership betting affairs at the $3 quote, but Sportsbet.com.au has decided to look past this year and open a market on a sustained period of success on the men from the West of Sydney.

Punters who think this year’s premiership is a GWS-lock can get $8 if they think they can go back-to-back in 2017.

Think a three-peat is on the cards? Ambitious punters can get the $21 quote on that outcome, while the elusive four in a row is at the $51.

The Giants will be saying ‘one week at a time’ but you can expect these prices to plummet if GWS make this year’s Grand Final.

GWS Premiership Markets:
Odds provided by Sportsbet.com.au and include 2016