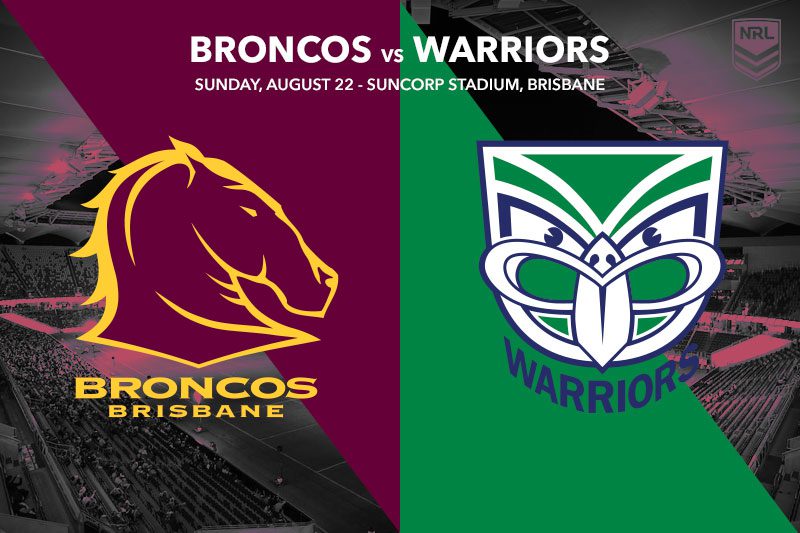 The Brisbane Broncos will host the New Zealand Warriors to close out Round 23 at Suncorp Stadium on what is expected to be a glorious Sunday afternoon of NRL action.

Brisbane’s move in the right direction for 2022 will be put to the test when they come up against a team who have quietly won three games in a row and are still in the mix for an unlikely finals berth. Should results go their way over the course of the weekend, the Warriors could be in a tie for eighth place with two games to play.

The Broncos will go with largely the same side that lost to the Roosters in heartbreaking fashion, with the exception of Anthony Milford coming in to start at five-eighth in place of the injured Tyson Gamble. Dallin Watene-Zelezniak and Bayley Sironen will make their way into the starting 13 for the Warriors after missing the 24-10 win over Canterbury.

The last time these two clubs met at Suncorp Stadium, the game ended in an 18-all draw after 90 minutes of play couldn’t separate the two sides. Expect to see a similarly close game on Sunday afternoon.

Considering the improvement over the last month and the way they pushed the Roosters in a game many believe they were robbed, the 1-12 margin for the Broncos at $3.40 is a fantastic bet to get on. The Warriors have lost seven games by eight points or less in 2021, so it’s hard to see Brisbane getting away from them by a big margin, if at all.

The renaissance of Corey Oates on the wing sees him come in as the $10 favourite to score the first try. He has form against the Warriors, scoring first in three of his last five games against the Kiwis. Jordan Riki out on the right edge is paying a tidy $3.75 to score at any time, and he has scored in two of his last three games at Suncorp Stadium, so he shapes as a nice outsider to get behind.

While they’ve lost seven games by eight points or less, the NZ Warriors have won another six by that exact same margin. The -1.5 head start at the line feels like an absolute given if you are tipping the Warriors, and they still have a final berth to play for, which makes them terrific value at $3.40 for a 1-12 point win. The other factor that swings favouritism the way of the Warriors is the poor recent record in daytime footy of the Broncos, who have lost seven of their last nine games under the sun.

Reece Walsh is going to be the most heavily backed Warrior to score a try at $1.62, and there will be a bit of spice in this game given he was a Bronco to start the season. Euan Aitken has three tries in as many games since his switch to the back row of the scrum, which makes him a good prospect at $3.50 to score at any time.

Two of the best big units in the game come up against one another this weekend in Addin Fonua-Blake and Payne Haas. The athletic ability of both men considering their size is remarkable, and the eye test tells fans their respective teams are much worse when they are resting on the bench. There is no reason to overcomplicate it; the winner of this mano-a-mano battle decides the game.

We reckon the Warriors will sneak home in the final 15 minutes to keep alive a season which looked dead and buried a month ago. As per usual, they’ll have their fans biting their nails constantly and the 1-12 margin will get up.