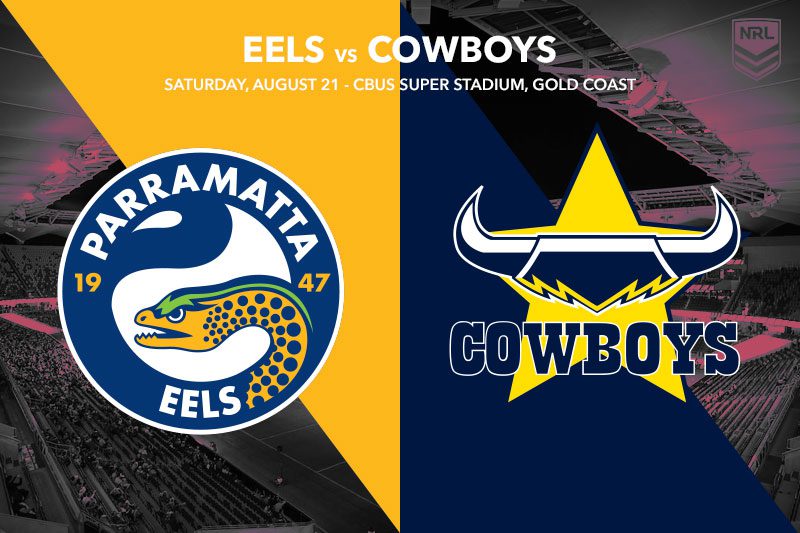 The Parramatta Eels will have the perfect opportunity to stop the rot in round 23 when they take on the North Queensland Cowboys on Saturday evening on the Gold Coast. Despite their horror four-game losing streak, the Eels come into the game as the $1.31 favourite against a Cowboys side who themselves are on a shocking nine-game losing run.

Parramatta coach Brad Arthur has swung the selection axe, replacing Tom Opacic with rookie Will Penisini and Michael Oldfield with Haze Dunster. Marata Niukore will start on the edge to replace the suspended Ryan Matterson, while Shaun Lane will also start to accommodate the absence of Reagan Campbell-Gillard.

The Cowboys get some big names back into their side as they attempt to consign Parramatta to more misery, with Jason Taumalolo and Hamiso Tabuai-Fidow both named in the extended squad. They will be given every chance to take their place, but they’ll need more than the spark those two provide if they are to get their first win away from Townsville since Round 5 – still their only win on the road this season.

Parramatta’s last month of football has been terrible, but they should have no dramas in winning this game. On paper they’re a much better footy side and that alone is going to be enough to get the job done. The $2 on offer for a 13+ win is a good market to get on when you consider the Cowboys have lost 66% of their games by that margin in their nine-game losing run. Even the $1.90 for the -11.5 start buys a tiny bit of security should the game be decided by two converted tries with minimal value lost.

Maika Sivo is the $7 favourite to score the first try and he might be the best player to be on for the Eels. He has been quiet over the last month and if the Eels are to fire, he is going to be one of the main contributors. Marata Niukore is worth a look at $4.20 to score a try over on the right edge, where he will get the chance to run at Scott Drinkwater.

North Queensland will be absolutely friendless in the head-to-head market. To have fallen the way they have since their bye is almost unbelievable, but even if they can’t get the win on the scoreboard, the punters should still be able to make some gains.

Any time you can get $1.72 for Kyle Feldt to score a try, you should take that and run. He has averaged two tries every three games of his NRL career, so the numbers are on the punters’ side. Valentine Holmes is another who has good tryscoring form, especially at CBUS Super Stadium. He has four tries in his last five games at the ground and is paying $2.25 to make it five from his last six.

Haze Dunster was found wanting against Souths in his last NRL performance on the wing, with the likes of Cody Walker giving him more headaches than a punch-drunk boxer. Why the Cowboys need to look at his inclusion as a positive for them is the skillset down the left side of Scott Drinkwater, who has shown plenty of flashes in 2021. Dunster was regularly beaten on the outside with a cut-out pass, and it got no better on the inside as he failed to recognise when the attacking runners would change their angles. His indecisiveness opens up the field for Drinkwater to be able to kick behind him, which can only lead to success.

Parramatta win at the 13+ margin and will get a small reprieve from the negative headlines which seem inescapable at this point. While they may run up a score, their fans will get no comfort from it and the wider NRL public will only confirm the bias they already had against this team. Kyle Feldt will also score a try and then provide a whacky moment of brilliance that only he can.