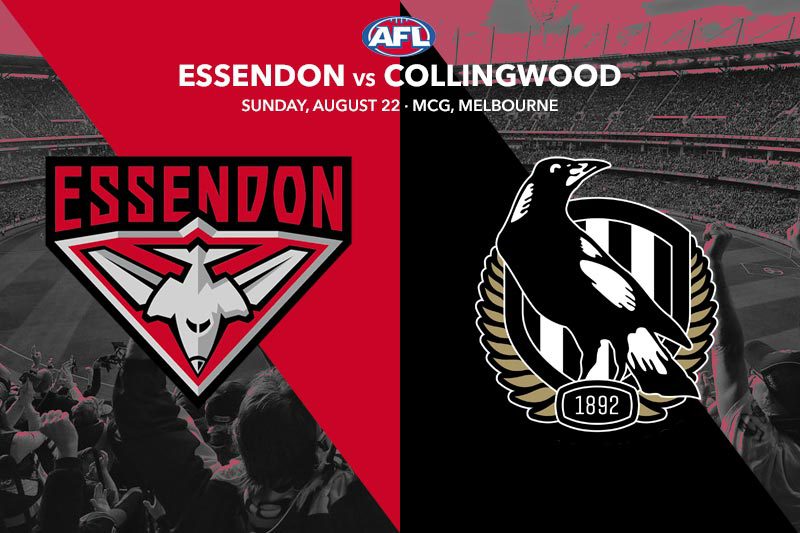 A win at the MCG this Sunday would guarantee the Essendon Bombers a spot in the 2021 AFL finals, but the Collingwood Magpies will be eager to spoil the party.

The two fierce rivals enter this contest in contrasting form. The Bombers beat the Suns by 68 points in round 22, while Magpies went down by 85 points to the surging Lions.

Brody Mihocek will top Collingwood’s goalkicking for the third consecutive year, but the key forward will not face the Bombers after receiving a one-match suspension. Trey Ruscoe is out injured, while Jeremy Howe is available and Reef McInnes is a chance to make his AFL debut.

The Dons have no forced outs this week and could bring an unchanged side to the MCG, although Nik Cox and Brayden Ham are on standby if Ben Rutten and co. decide to make some tactical changes.

Essendon came out on top in this year’s ANZAC Day battle, but the Magpies will be eager to get their revenge this weekend and possibly knock the Bombers out of the top eight.

The round six bout between these sides was a marvellous spectacle, as fast-paced ball movement from both teams made for a high-scoring affair. The two teams combined for 49 scoring shots and a total of 194 points. With perfect conditions forecast in Melbourne this Sunday, we could be in for another shootout at the ‘G.

One of the most reliable players in the AFL is Collingwood’s Jack Crisp, who is on track to play every game of the season for the seventh consecutive year. Crisp has averaged 27 disposals per game rotating through the middle and half-back, but he has surpassed the 30-disposal mark in three of his last four outings. Crisp offers great value to get 30 or more touches this Sunday at $2.10 with Sportsbet.

Two of the most improved midfielders in the competition will go head-to-head this weekend when Darcy Parish and Jordan De Goey meet at the MCG. Parish announced himself as a star on the rise with 42 disposals and two goals on ANZAC Day earlier this year, while De Goey has been a revelation since moving to an on-ball role midway through the season.

Both players are more than capable of amassing huge numbers in the midfield, but it’s their ability to hit the scoreboard that sets them apart from some of the league’s other heavy accumulators. While we know De Goey is a big threat inside 50, we like the $2.20 odds for Parish to split the middle at some stage this Sunday.

We do not think the Bombers will pull any punches against Collingwood this Sunday as they look to secure a finals berth. With no Scott Pendlebury, Darcy Moore or Brody Mihocek, the Magpies will be running thin in all areas of the ground. Jake Stringer is in great form and should lead the Dons to a big victory at the MCG.

Darcy Parish has kicked 9.6 this season for the Bombers and could well add to his tally this weekend. Parish kicked a pair of goals against the Magpies earlier in the year in a breakout performance that earned him the ANZAC Medal. The Pies have conceded a lot of goals to opposition midfielders this season, and we suspect Parish will punish them once again.

The Bombers will show no mercy this Sunday and notch up another big win against the Magpies. Darcy Parish looks a good chance to push forward and kick another goal in a high-scoring battle, while Jack Crisp will rack up plenty of stats.