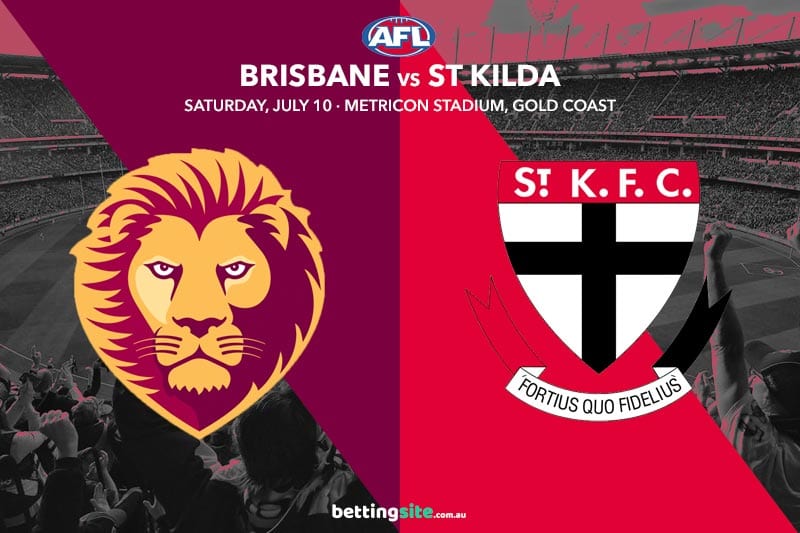 Round 17’s Saturday night clash between the Brisbane Lions and St Kilda Saints will be played at Metricon Stadium, as the AFL relocated the match away from the Gabba to avoid COVID restrictions in Queensland.

Chris Fagan’s Lions are the in-form team of the competition after winning their last three contests, while Ben Rutten’s Saints are making their own late charge towards the finals with two wins on the trot.

Lachie Neale missed round 16’s victory over the Crows with an ankle issue, but the reigning Brownlow Medal winner will likely slot back into the side this week.

The Saints got through their unimpressive win over the Magpies unscathed, meaning they do not need to force any changes at the selection table.

Brisbane won last season’s clash against St Kilda by just two points, which has us excited for another close contest between the Lions and Saints this Saturday.

Taking away the Lions’ home field advantage at the Gabba will only have a slight affect on this contest, but it could still be enough for the Saints to cause havoc. The Saints defended very well against the tall Collingwood forwards in round 16, meaning they should be prepared for the likes of Joe Daniher, Eric Hipwood and Daniel McStay.

The Saints have turned their form around in the last few weeks off the back of their young key forward, as Max King has kicked six goals in his last three matches and has been stronger in the air. The bye round came at the right time for St Kilda, as King is back to playing with confidence. Sportsbet is offering $2.30 for King to kick multiple majors against the Lions.

These two club captains have been outstanding for their respective teams this season. Jack Steele has emerged as a popular smokey in the Brownlow Medal betting, while Dayne Zorko has been damaging by foot this season for the Lions and has started hitting the scoreboard more often in recent weeks.

This week will be a huge milestone for Zorko, who will play his 200th career game. We think the Brisbane captain will play very well in the midfield to mark the special occasion. Zorko is priced at $2 with Sportsbet to get 25 or more disposals against the Saints this Saturday night.

We took the Saints at a similar line against the Richmond Tigers two weeks ago and it paid off, which is why we are going down the same route this weekend. The Lions did not blow out Adelaide until the second half of their round 16 contest, as the young Crows started well before running out of legs. The Saints should put up a good fight knowing a spot in the finals is within reaching distance.

Having kicked six goals in his last three contests, Max King is showing excellent signs at full forward for the Saints. The Saints’ bye round was an excellent refresher for the young superstar, who has come back and thrived deep inside 50. Harris Andrews kept King goalless last season, but that should change given his marking, strength and goal-kicking has improved.

We think the Saints are worth a look this weekend against the Lions, especially if Lachie Neale does not recover from his calf injury in time. Zorko will be at his best in his 200th game, while Max King will kick a pair of goals. You can combine these three legs to boost your value to $8 with Sportsbet.