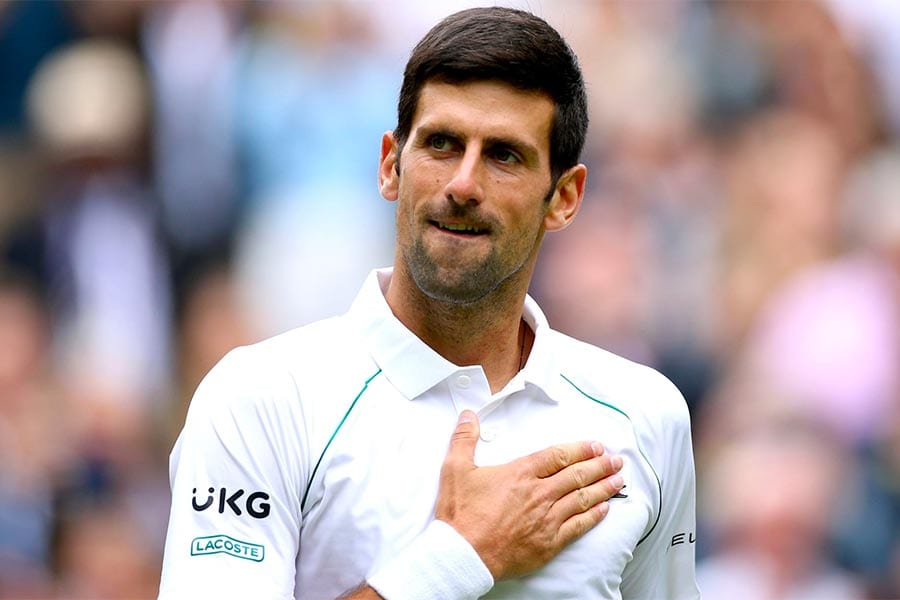 With only four players left in the draw, Novak Djokovic is now a -416.67 favorite to win the gentlemen’s singles title at the 2021 Wimbledon Championships. Can any of the remaining men in the field pull off an upset on the five-time Wimbledon champion? Denis Shapovalov will try this Friday, and the winner of the Matteo Berrettini vs Hubert Hurkacz match will get a shot at Djokovic in the final should Shapovalov lose in this round.

There was no drama at all in Novak Djokovic’s 6-3, 6-4, 6-4 win over Marton Fucsovics on Wednesday. Since losing his first set at Wimbledon in the first round against Jack Draper, Djokovic has won 15 straight sets. When the best player in the world is healthy and in form, there really isn’t much his opponents can do about it.

Denis Shapovalov won an exciting quarterfinal match against Karen Khachanov on Wednesday by a score of 6-4, 3-6, 5-7, 6-1, 6-4. Shapovalov is having an excellent tournament, and his serve and backhand are tools that give him a real shot to win on any given day. But with an 0-6 lifetime record against Djokovic and Djokovic dialed in the way he has been, it would take both a near-perfect performance from Shapovalov and an off-day from Djokovic to spur an upset. We don’t see it.

Matteo Berrettini continued his impressive run through this year’s Wimbledon tournament with a 6-3, 5-7, 7-5, 6-3 win over Felix Auger-Aliassime on Wednesday. Berrettini won the Queen’s Club Championships in London prior to this event and has now won 10 straight matches. Remarkably, over his current 10-match winning streak, Berrettini has won 25 sets and dropped only three.

Hubert Hurkacz did not enter Wimbledon with momentum like his semi-final opponent did, but he’s got plenty of it now. Hurkacz gutted out an impressive 2-6, 7-6, 3-6, 6-3, 6-3 upset win over Daniil Medvedev in the Round of 16 and followed that performance up with a stunning 6-3, 7-6, 6-0 victory over Roger Federer in the quarter-finals. Even though Federer wasn’t close to his best on Wednesday, Hurkacz deserves credit for playing extremely solid tennis and never letting the moment or the stakes get to him as the crowd in England tried to will Federer back into the match.

This is a really tough spot. On the one hand, it’s difficult to pass up these healthy underdog odds on Hurkacz given how well he is playing in this tournament. On the other hand, Berrettini may be playing even better, and his power game seems to match up well against Hurkacz’s. Hurkacz did beat Berrettini 6-4, 6-3 in the Miami Open when these two last met in 2019, too. It’s close, but we feel like Berrettini gets the job done one way or another.