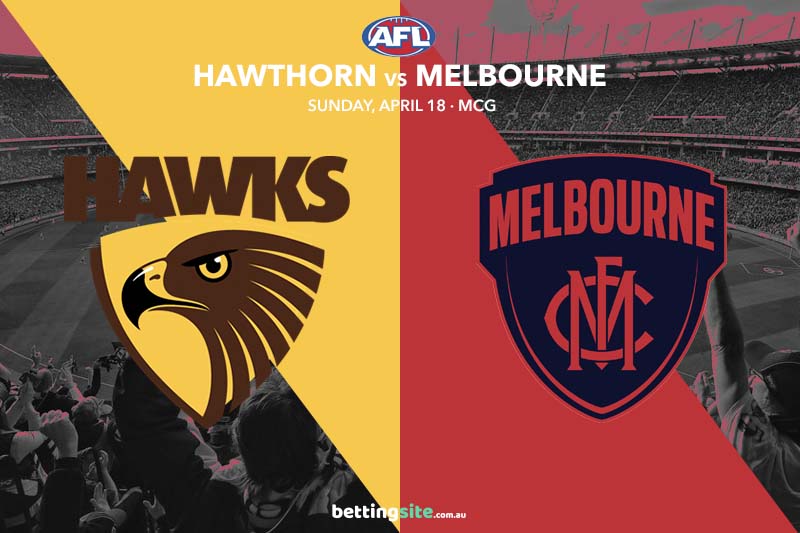 Rebuilding Hawthorn faces an uphill battle against the undefeated and rampaging Melbourne at the MCG on Sunday. Online bookmakers have Hawthorn as the outsider with close to $4 odds available for the young Hawks. Melbourne, which is looking to go 5-0 with a win on Sunday, are skinny at $1.26.

Hawthorn is coming off a gritty 15-point loss to Fremantle over in Perth and will be hoping that Daniel Howe can pull up from a shoulder injury for this must win clash. The Hawks need everything to go their way, with their classy players such as Mitchell, Wingard, O’Meara and Worpel at their best. Without Mitchell Lewis (suspended) in their forward line, a lot of responsibility lies on the shoulders of Tim O’Brien and veteran Luke Breust.

Melbourne needs to find replacements at both ends of the ground with key duo Steven May (eye) and Bayley Fritsch (hand) injured. The pair have been integral parts to Melbourne’s surge up the ladder. If the Demons can cover their absences there is no reason why they should not be going 5-0 at the MCG on Sunday afternoon.

How will Hawks v Demons play out?

If Hawthorn is to have any chance they need a big effort not just from their best players, but the second tier. Changkuoth Jiath has arguably been one of their best players this year, averaging a touch under 24 possessions in the first month of footy. So the odds of $2.20 available looks to be perfect value to take advantage of, as the man known as CJ looks to continue his strong form.

With Bayley Fritsch (hand) out, the output for Christian Petracca up forward looks set to increase. The midfielder managed to slot two goals against the Cats in Round 4, and with $3.40 on offer for him to go one better and kick three or more goals against the young Hawks.

Two absolute ball magnets are set to go head to head at the MCG on Sunday, when Tom Mitchell and Clayton Oliver face off. The pair will essentially shake hands at the first bounce and most likely not see each other again until the final siren. Mitchell averages 34 touches a game to Oliver’s 32 touches and both will be integral as to how the game pans out on Sunday afternoon. Despite the high disposal counts, it will be how they use the ball that could have a big impact. Oliver signed a new two-year deal at the beginning of the week and will be looking to mark the occasion with a best on ground performance in a bid to help the Dees get to 5-0.

For the first time in 25 years, the Dees enter Round 5 with four wins next to their name, and if they are to be genuine premiership contenders this season they need to be beat Hawthorn. The Dees appear a more balanced and settled lineup than their opponent and if they reach their potential for long enough, they will be hard to beat. With $1.26 too skinny for my liking in the head-to-head markets, Melbourne by 25+ looks to be the better value play.

Nathan Jones has not crossed 20 disposals since round 20, 2019, but the former captain will look to make his 299th game a memorable one. The former Melbourne captain is averaging a shade under 15 touches this year, and with more midfield time expected against Hawthorn, the $3.50 on offer for him to rack up 20+ touches is hard to ignore.

Despite Hawthorn proving hard to finish off in the first month of footy, we expect Melbourne to be too strong for them across all three lines. The Dees forward half looks potent, even without Fritsch and with Petracca set to spend more time forward, they should be putting a decent margin on the Hawks. We also expect Nathan Jones to wind back the clock, along with young Jiath from Hawthorn to continue his early season form.