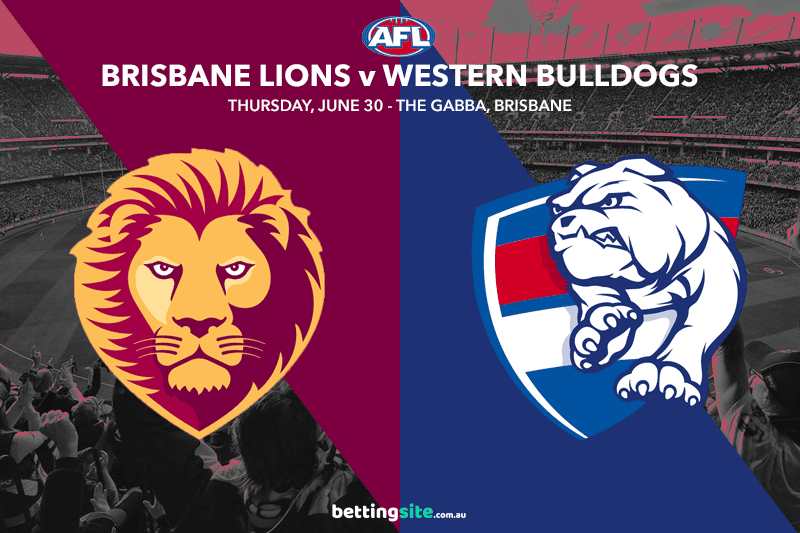 What better way to kick off round 16 of the AFL season than a massive game between two finals hopefuls, as the Brisbane Lions host the Western Bulldogs this Thursday night at the Gabba.

Luke Beveridge’s men snuck into the top eight after a turbulent start to their 2022 campaign, but they could drop straight back out if they cannot secure a victory this week against the Lions.

The Brisbane Lions were on the receiving end of a thrashing by the hands of the reigning premiers last week, but they return to their home deck this week and will bring back some important experience.

Dayne Zorko was extremely close to returning from a hamstring strain last week, but the elite ball-user was forced to wait until this week before re-joining the main group.

Tim English has been super for the Western Bulldogs this season, but the breakout ruckman missed last weekend with delayed concussion symptoms, which will keep him sidelined for this match as well.

Online bookmakers have started the Lions as favourites in their home state, but after the Bulldogs kicked seven goals in the fourth quarter against the Hawks, you never know what could unfold.

Two of the key operators through the middle of the ground will be the smooth-moving Hugh McCluggage and Marcus Bontempelli, who each love to get on the outside and use their elite ball skills. Both stars are travelling very well so far in 2022, with McCluggage becoming one of the league’s best midfielders in a breakout season.

Marcus Bontempelli has spent more time up the ground to great effect, having kicked a goal in all of his contests this season, but we think he will move back into the midfield this weekend. Bontempelli has averaged over 28 disposals across his last five contests with the Lions, while the void of Bailey Smith led to a 27-disposal effort last weekend. Keep an eye on ‘The Bont’ in this week’s disposal betting markets.

The Bulldogs entered the 2021 semi-final against the Lions as outsiders, yet they managed to win by a point. We think this week’s match will follow a similar trajectory to the most recent clash, as it should once again go down to the wire. The absence of Tim English is going to hurt the Doggies, but they can manage considering Jack Macrae and Tom Liberatore are experts at sharking hit-outs.

With 11 goals in the last four matches against the Western Bulldogs, Eric Hipwood must be considered to kick a couple this Thursday night. Hipwood has played six games so far this season and only just kicked multiple goals last week, but that could be the spark that gets the superstar back to his best following his ACL recovery. The Bulldogs have always been thin down back in the key defender department.

Marcus Bontempelli will be instrumental in the midfield for the Western Bulldogs and force a close contest at the Gabba, while Eric Hipwood will finally return to his goalkicking best up the ground.