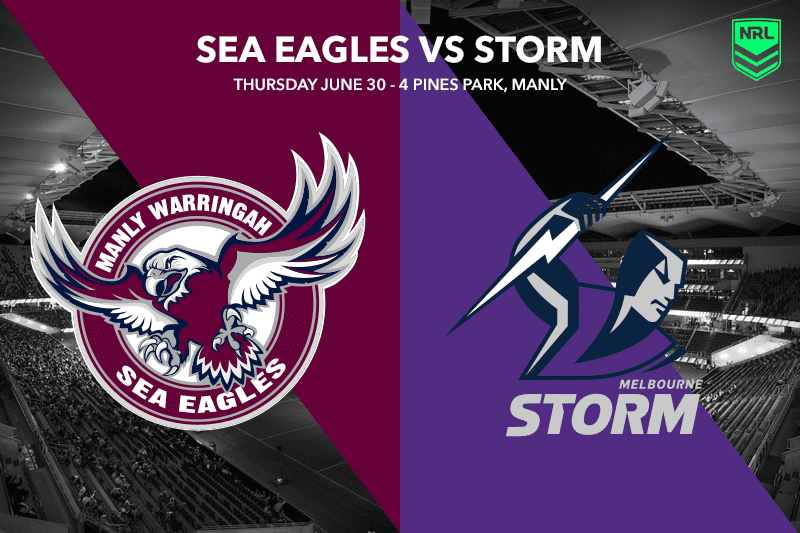 Round sixteen of the 2022 NRL season will kick off from the northern beaches of Sydney as the Melbourne Storm travel north to take on the Manly Sea Eagles at 4 Pines Park.

Both sides have several International and State of Origin representative players coming back to the first-grade side, including some key omissions. The Sea Eagles will be needing all the assistance their spiritual home can give them if they’re to take down this Storm juggernaut on Thursday, and with the return of Ryan Papenhuyzen on the cards, that makes the task even more difficult. Will they be able to pull off the almost impossible?

Halfbacks Daly Cherry-Evans and Jahrome Hughes return from their respective representative duties along with, Haumole Olakau’atu, Jake Trbojevic, Harry Grant, and Brandon Smith. Cameron Munster could return, but will be battling the clock after suffering what’s reportedly an AC joint injury in his left shoulder. Josh Aloiai will be missing for the Sea Eagles following his concussion over the weekend and Storm back rower will not be taking his place Thursday for personal reasons.

The possible return of Papenhuyzen will trigger a backline reshuffle that would likely push fullback Nick Meaney to the left edge currently occupied by Dean Ieremia. This will create great value for Meaney to score at any time during the match paying $2.60, given he is the more experienced winger between himself and fellow winger Grant Anderson.

Brandon Smith will be another to watch as an anytime try scorer for the Storm. While he did play in Rep round, Smith has been named to start in the lock forward role and is expected to play bigger minutes given he has had longer to recover than teammate Harry Grant. Smith will be pushing through the middle third and likely to score at any time paying $3.70.

Manly are not without a hope of scoring but will have their backs against the wall against this incredible Storm unit. If Manly are to score at all, it’s more likely the tries come on the edges as the Seas Eagles have more athletic, high-flying wingers. That will make conversions difficult, resulting in lower points totals for Manly. Although they may get on the board, it’s hard to see them exceeding 10 points in total at odds of $2.75.

Should Papenhuyzen return from injury and Covid on Thursday, the battle of the fullbacks should be brilliant to watch. Both these fullbacks will be rested well having not played representative football and should be firing on all cylinders Thursday. With their halves all having played rep footy over the weekend, it will be the job of the fullbacks to provide the extra potency in attack for their respective side. Whoever of these two incredible fullbacks is better in their ball playing and attack, will be the one who decides the outcome of this match.

In a rivalry that boasts games such as the great ‘Battle of Brookvale’ which took place in 2011, the Melbourne Storm have been victorious on 25 occasions with one draw and win 50% of their games in Brookvale. Manly will have their hands full especially if Papenhuyzen does return as they continue to stumble through 2022 without Tom Trbojevic.