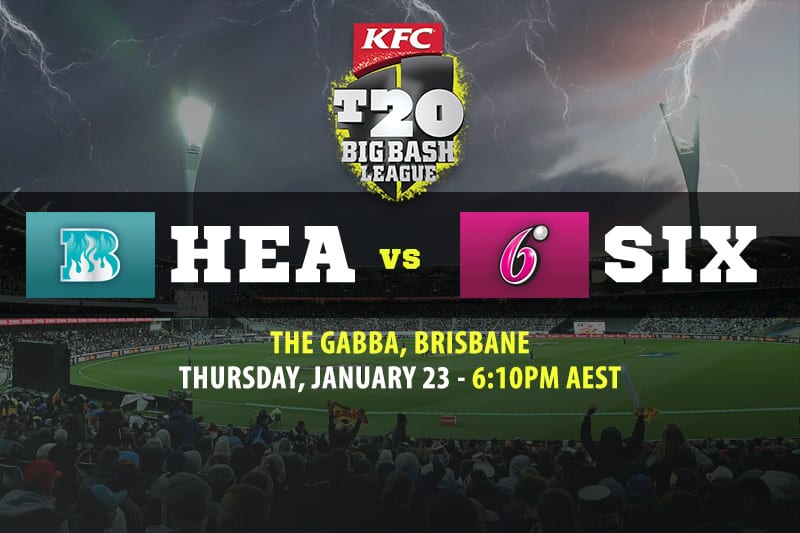 Strap yourself in for a huge night of big hitting as Chris Lynn and the Brisbane Heat host the Sydney Sixers at The Gabba in the T20 Big Bash League.

The Heat and the Sixers are desperate to stay inside the top five on the BBL standings, with both teams well and truly in the running to make the finals.

The Sydney Sixers have created a strong lead over the Adelaide Strikers, who sit one win behind the New South Wales franchise, whilst Brisbane’s run is a little tougher after dropping a seemingly unlosable match against the Melbourne Renegades.

The Sixers ended the Melbourne Stars’ winnings streak in their most recent affair, where captain Moises Henriques was outstanding and Nathan Lyon made his first appearance in BBL09.

The Heat could jump into the finals places with a win at home this Thursday, so there is plenty riding on this BBL fixture.

Chris Lynn Heat top runscorer @ $3.40 with BetOnline
We all know what happened the last time Chris Lynn faced the Sydney Sixers, but if you have already forgotten, he made 94 runs off only 35 balls. Lynn has the capacity to do this in most matches, but his BBL09 campaign has not been as dominant as usual. We know Lynn will target the Sixers, and we believe it will work to great effect.

James Vince Sixers top runscorer @ $4.50 with BetOnline
Outgunned by his captain Moises Henriques, who made a lazy 72 off 32 deliveries, James Vince’s 41no off 22 balls against Stars is not getting as much attention. Vince is finding form at the right time of the season and looks a good shout at odds to top score for the Sixers at The Gabba.

Ben Laughlin 2+ wickets @ $3.25 with BetOnline
Ben Laughlin’s 13 BBL09 wickets have all been earned with his well-timed decision making. He bowls the correct ball for the situation and executes his plans more often than not. The Sixers’ top-order players have always found batting difficult against good bowlers, and Laughlin definitely belongs in that category.

Nathan Lyon 2+ wickets @ $4.50 with BetOnline
Australia’s favourite spinner is hoping to bolster his chances of a recall to the national ODI and T20 sides with a strong finish to BBL09. Marcus Stoinis got a hold of Lyon late in the match on Monday night, but the classy offy will find a way to bounce back and take some valuable wickets against the Heat.

Sydney Sixers to win @ $2.20 with Sportsbet
The Brisbane Heat lost to the Melbourne Renegades in their last match, while the Sydney Sixers beat the Melbourne Stars in their most recent outing. We are taking the underdogs at $2.20 every day of the week. The Heat have failed at The Gabba multiple times this season, so the value is with the visitors.