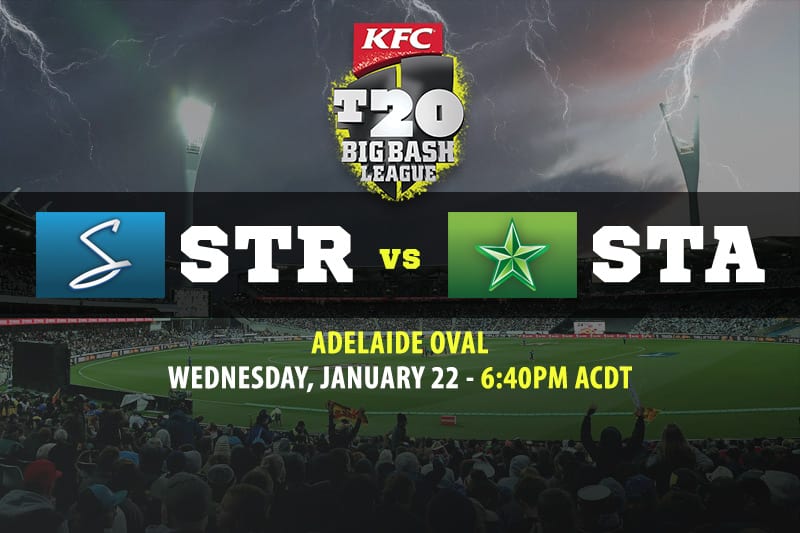 The Adelaide Strikers will look to beat the Melbourne Stars for the second time this season when they host the Big Bash League leaders on Wednesday night.

The Stars have been the best team all season long, but they failed to beat the Strikers when they played at Metricon Stadium earlier in the campaign.

Marcus Stoinis has been the best batsman in the competition, but whether he can assert his influence against Adelaide’s excellent bowling attack is another question.

With the Strikers on the rise towards as the season progresses, there is a chance that these teams could end up meeting in the BBL finals.

The Strikers are only three runs off being the most effective batting team in the league, as the Perth Scorchers are currently leading the stat.

This is a guaranteed blockbuster game that can go either way. Can the Melbourne Stars extend their lead, or will the Strikers do the double?

Jonathan Wells Strikers top runscorer @ $4.50 with Sportsbet
The numbers that Jono Wells keeps producing are right up there with the best in the competition. Averaging 70 runs per innings with a strike rate of over 130, Wells has made the fifth-most runs of all batsmen in BBL09. If Jake Weatherald and Travis Head are not making runs, you can assume Wells will save the Strikers.

Marcus Stoinis Stars top runscorer @ $3 with Sportsbet
There is not a lot that needs to be said about Marcus Stoinis at this point of the season, as he is clearly the best batsman in the league. With 130 more runs than the next best player, Stoinis looks like he hails from another dimension – one where the bowlers are clearly better. Stoinis will get the most runs for the Stars in this match.

Rashid Khan Strikers most wickets @ $3.40 with Sportsbet
Rashid Khan has 16 wickets from 40 overs bowled in BBL09, which means he is striking every two and a half overs. Khan is a master at Adelaide Oval and clearly needs to set his eye upon Marcus Stoinis and Glenn Maxwell, as few bowlers have beaten them convincingly yet. Khan took one wicket last time these teams met.

Nathan Coulter-Nile Stars most wickets @ $4.20 with Sportsbet
With Haris Rauf and Dale Steyn not available for the Stars, Nathan Coulter-Nile needs to stand up and bowl some good pace. The Strikers saw off Coulter-Nile’s four overs without issue when they beat the Stars earlier in the season, meaning he needs to be better this time. With seven wickets in eight games, the tall paceman is a good choice for this match.

Adelaide Strikers to win @ $2.19 with Sportsbet
The Adelaide Strikers are the only team in the BBL that have beaten the Stars this season, and we think they will do it again. Travis Head, Jake Weatherald and Jonathan Wells will do the job with the bat, while Peter Siddle, Rashid Khan, et al will continue to perform with the ball.