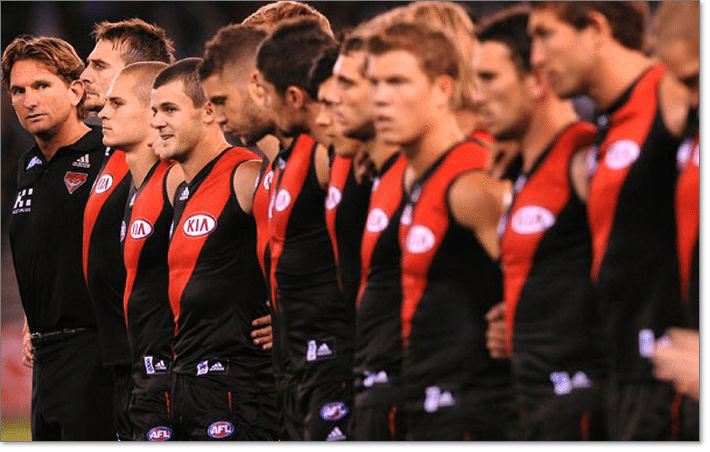 And the punters are clearly falling for Essendon’s swathe of top up players, with 250 punters with online bookmaker sportsbet.com.au backing the Bombers to win the AFL premiership.

Should that happen, those punters would share in a remarkable $2.25 million pay out, with the club’s odds shredded from $501 into $251.

Despite the rampant turmoil that saw 12 current Bombers rubbed out for the season after the long running supplements sage, the Bombers have moved quickly to top up their list.

The top up players have been a solid who is who of retired players and blokes who maybe just need a change of scenery after not quite making the grade at their former clubs.

Given licence to sign 10 players, the Bombers have already nailed down seven, with the latest addition being former Richmond defender Matt Dea.

Dea only managed 31 games for the Tigers over his six year stint, but always showed plenty of talent and is coming off winning their best and fairest in the VFL.

The Bombers signed former Melbourne big man Mark Jamar as their ruck coach, but that could prove convenient, with the club offering him a deal to join its ruck division on the field.

The word out of the True Value Solar Centre is that Ryan Crowley is absolutely training the house down after being handed a lifeline following being cut by the Fremantle Dockers on the back of a 12 month suspension for his own prohibited drug incident.

And he is a big fan of the Dons’ young bucks.

Crowley was the Bombers’s first top up signing after the Court of Arbitration handed down its ruling that the Essendon 34 must spend a year out of the game.

“They’ve got some really talented young mids, some guys you wouldn’t have even seen yet,” Crowley said.

“(Darcy) Parish, (Jayden) Laverde, (Zach and Jackson) Merrett – I was really impressed on day one.

“They were like little sponges soaking everything up and hopefully that helps them.”

Crowley, 31, played 188 games as one of the best taggers in the game with the Dockers, but he doesn’t see his opportunity at the Dons as a one and done deal.

“I’m going to go over there and train my heart out and hopefully earn the respect of the boys there,” he said.

“If you’re playing good footy I don’t see any reason why it couldn’t extend.

“All I was looking for this year was a foot in the door somewhere and just back myself in and back my training habits in and obviously my performances on game day.

“I’ve never been as eager to get out there.

“I’ve missed footy so much over the last year.”

Crowley will be the man charged with stopping the opposition’s best midfielder, week in, week out.

“As taxing and as hard as that tagging role is, if that’s what John (Worsfold) wants me to do each week, it’s an amazing feeling to be able to pit yourself against one of the genuine stars of the competition,” he said.

“I kind of consider myself to be more of a ‘trier’ than a skilled player.

“To be able to play against these guys that have won Brownlow medals and just been genuine stars – it’s a really cool thing, I’m really looking forward to it.”

The Bombers have until March 15 to sign at least three more players – all expected to be key position top ups.

The Bombers defence has been shredded by the retirement of Dustin Fletcher and the suspensions of Cale Hooker, Michael Hurley and Tayte Pears.

A pair of VFL players in Michael Hartley and Mitch Brown, along with Dea and former Saint James Gwilt are set to form a nucleus that pales in comparison to the men that they replace.

While there is plenty of love for the Bombers, the same could not be said for Carlton.

Despite the Bombers being $1.25 for the least wins in 2016, the Blues are the clear punters’ pick at $5, with more than 75 per cent of the money at Sportsbet coming for them to win the spoon.

Both the Blues and Dons are rated a $251 chance to win the flag.

“Even with 12 of its best players sitting out the entire 2016 season, punters prefer Essendon over the Blues in almost every market,” the bookie’s Ben Bulmer said.

“Essendon has picked up a number of handy recruits to cover for the loss of its stars with punters confident this will translate to wins in 2016.”