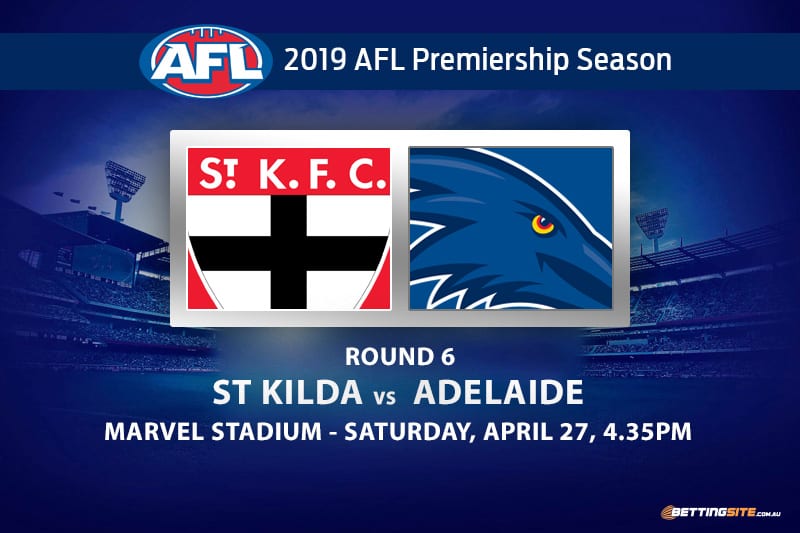 Two clubs that have found themselves in unusual situations will face off at Marvel Stadium this Saturday afternoon.

The St Kilda Saints have somehow reached second place on the AFL ladder after five rounds, a place they haven’t been to in nine years.

They will host the Adelaide Crows, who after plenty of anticipation, are only 12th on the ladder after five rounds.

After a number of years mired in mediocrity, St Kilda is enjoying its early success, built on some good recruiting and resurgent form from some key young players.

A perfect example of this was former Demon Dean Kent last week, who kicked three goals and provided an option at half forward.

The Crows had to make a selection decision before last week’s match with the Suns, and key forward Josh Jenkins copped the axe.

With Jenkins out of the 50, it left room for Eddie Betts to dominate in his 300th match, kicking six goals, including a goal-of-the-year contender.

A win is paramount for both sides. The Saints could take one step closer to an unlikely finals campaign and keep the vultures at bay for the Crows.

With his gut-running and kicking power, Dean Kent sent his old team home crying after kicking three goals last week. The Demons could not stop the forward as he continued to run and gather possessions. The Crows, surprisingly, may struggle to find a defender that can match Kent, which would have been a laughable point just a few weeks ago. Kent could kick more than two if he straightens his set-shot kicking.

The speedy youngster has developed into a ball-magnet that goes forward to rest. The Saints midfield will be able to quell Atkins around the ball, but will fall short when he goes forward. Which is why he will kick a goal in this match.

Saints fans rejoice as it has finally happened — Jack Billings is playing great and consistent footy. Billings looks extremely comfortable at the contest, which is different from his role forward of the ball in previous years. Jack is winning his own football and providing run and carry, which is why he averages 30 disposals per match. The Crows midfield is often caught ball-watching, so expect Billings to benefit from this.

Contrary to his previous seasons at half back, Rory Laird has found much less of the footy in 2019. The tough defender was a consistent 30-disposal player last season, but has since turned into a more dour defender. The Saints forward line is full of taller players, which may free up Laird to get back to what he does best.

Saturday afternoon footy under the closed roof at Marvel Stadium will create the perfect contest. Both sides will carry decent form into the game, which we expect to be a close tussle. Neither side will be blown out, leaving enough room for the 15-point bracket to work either way.

Even though the Crows won by over 10 goals last week, the Saints appear to be the more consistent side, which is why they will beat the Crows in a tough close match, which will more than likely be low-scoring.