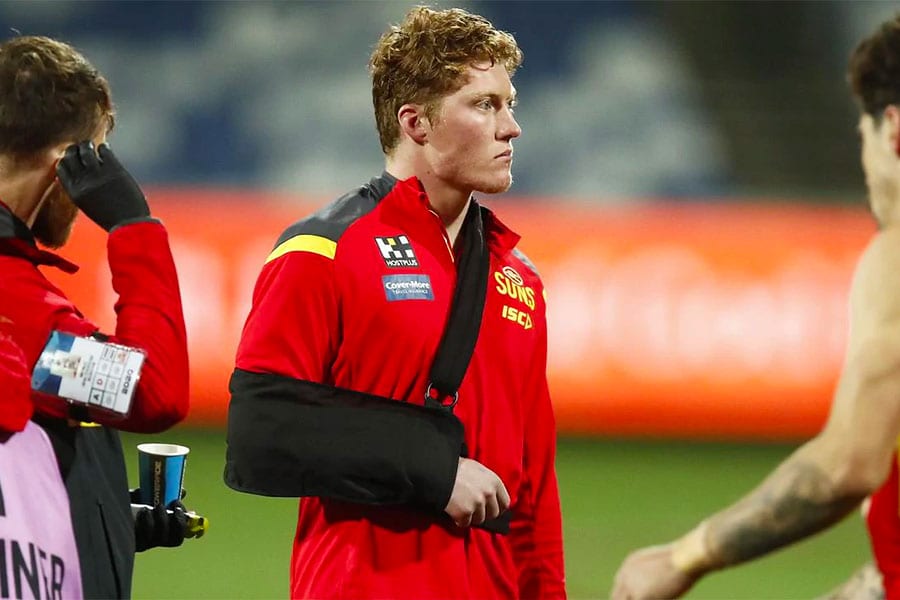 The best teams in the AFL are starting to flex their muscles now, including the league’s newest premiership favourites.

A semblance of predictability returned to footy this week as only one major upset occurred across the nine matches, being Essendon’s victory over Collingwood on Friday night.

Here is a look at the biggest bets, talking points and changes to the AFL futures markets after the completion of round five.

Injuries ruin AFL multis while forwards save the day

Crafting the perfect same-game multi has been extremely difficult this season, as the shortened game time makes it tough for midfielders to accumulate disposals, but the biggest issue has been injuries.

Luke Shuey’s day ended early on Saturday, as the 2018 Norm Smith Medal winner went down in the first quarter of West Coast’s win over the Sydney Swans.

Matt Rowell was involved in plenty of multis this week off the back of his exceptional form, but a shoulder injury suffered in the first quarter seriously hampered the Gold Coast Suns’ chances at Geelong.

Bailey Smith went off the ground early with a head knock in the Western Bulldogs’ win over North Melbourne, while Ben Cunnington and Tarryn Thomas were casualties for the Kangaroos.

A trio of Richmond stars went down on Sunday afternoon, with Dion Prestia, Trent Cotchin and Toby Nankervis all finishing on the sidelines as the Tigers held on to beat Melbourne.

Mitch Lewis missed the second half of Hawthorn’s loss to the GWS Giants, where many punters needed him to kick a goal.

In better news for footy punters, there were some genius bets that cleaned up over the weekend as a few brilliant individual efforts paid out handsomely.

Jaidyn Stephenson kicked the first two goals of the match as the Pies burst out the gates against the Bombers, which paid a wonderful $101 at Sportsbet.

Josh Bruce kicked an equal career-high six goals for the Bulldogs, while Jeremy Finlayson, Harrison Himmelberg and Jeremy Cameron combined for 10 goals for the Giants, all paying out big-time for clever punters.

Do the Lions or Giants deserve premiership favouritism?

Depending on which bookmaker you look at, either the Brisbane Lions or GWS Giants are the current premiership favourites, but we want to know who is more deserving of the title.

The Lions beat Port Adelaide convincingly on Saturday night and have been solid this season, while the Giants were just as convincing against the Hawks and downed the Magpies in round four.

It is hard to look past the Giants when their forwards are all in good form, but the Lions have a midfield that wins a majority contests and makes them count.

The main factor dividing these teams is their ruckmen; the Giants are relying on the crash-and-bash style of Shane Mumford, while the Lions are using Stefan Martin’s tap work and mobility to gain a strong advantage in the middle.

There is no way of telling which team is better until they face off in round seven, but for now, we like the Giants as they’re performing well with star players waiting to return from injury, such as their reigning best-and-fairest winner, Tim Taranto.

Are Richmond good enough to survive the Gold Coast hub?

The Richmond Tigers suffered three big injuries during their win over the Demons, but even more players are set to miss the next few matches.

Nankervis and Prestia have syndesmosis injuries, which has been very common this season, while Cotchin will need to rest his hamstring.

David Astbury is already ruled out after knee surgery, while Tom Lynch will need to play through the pain of a broken finger.

On top of the injuries, Bachar Houli and Shane Edwards will stay home with their young families, meaning they won’t be able to rejoin the team once they begin the hub.

The Tigers have already been scheduled to face the Swans and Kangaroos in the next fortnight, but with another two rounds of hub-life imminent, they could be in grave trouble if even sterner opposition looms.

As all 10 Victorian teams prepare themselves for life away from home, the interstate sides are licking their lips at the prospect of more home games.

Sydney, Fremantle and Adelaide have been ruled out by bookmakers after their poor starts, but they could play a huge role in knocking off a few Victorian sides if they get the chance.

Brisbane, GWS and Port Adelaide are in the best spot, especially the Lions and Giants as more matches will be played at their home stadiums.

The Lions haven’t left the Gabba since football returned in round two and will only need to travel to Sydney during rounds six and seven, while the Giants are locked in to battle the Power at Metricon Stadium.

How much do we trust Essendon after Friday night?

It has been a very long time since the Essendon Bombers have tasted success in the finals, but this year is starting to brew as one where their luck could change.

The Dons were outsiders for Friday’s clash with the Pies and looked set for a long night when they coughed up three early goals, but they found their groove midway through the first quarter and never looked back.

Jake Stringer has gone down with syndesmosis, ruling him out for the next month and a bit, so Essendon will have to figure out a way forward without its leading goalscorer in 2020.

Currently paying $2.40 to make the top eight, there is plenty of hope for the Dons if they can get a few wins while Stringer heals his ankle.

Is Lachie Neale going to win the Brownlow?

It would be irresponsible to call the league’s best-and-fairest winner after only five rounds, but you wouldn’t look silly backing in Lachie Neale after his scintillating start to the season.

With the most disposals in the league while hitting the scoreboard regularly, the Lions midfielder is looking hard to beat at $3 in the Brownlow Medal betting at Sportsbet.

Injuries to Nat Fyfe and Matt Rowell have seen their odds blow out, leaving Neale with only a handful of challengers at the top end of the market.

We like the $26 for Dylan Shiel, as he was best on ground against the Pies and has looked the goods in all of Essendon’s four wins.

Now is the perfect time to jump on the former Giant, as his price could drop dramatically with a few more strong performances in the coming weeks.