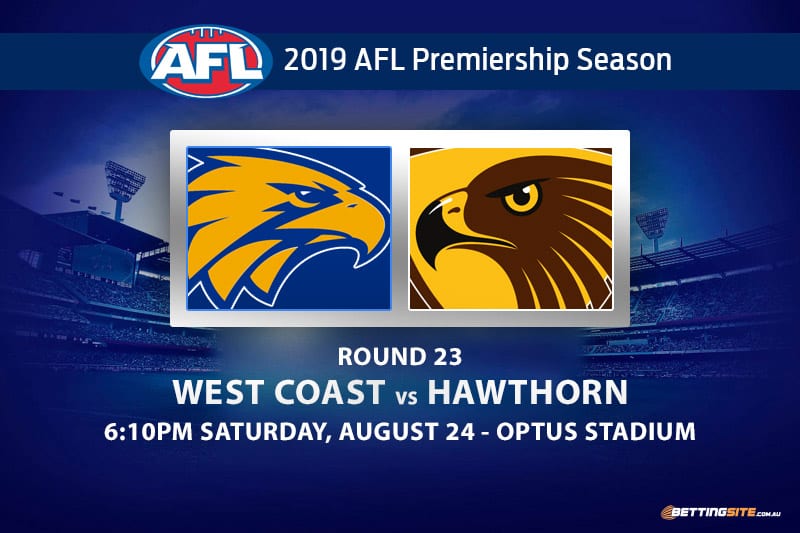 The West Coast Eagles and Hawthorn Hawks will lock talons in the main event for Saturday’s action in the last round of the 2019 AFL home-and-away season.

Sitting ninth on the ladder, the Hawks need to secure a victory this week if they want to play in the finals, but the trip over to Perth will not be easy.

If Adam Simpson can coach the Eagles to a win, they will secure a top four position on the ladder and could even jump inside the top two, which would guarantee them two home finals.

With the season well and truly alive for both sides, it all comes down to this massive game at Optus Stadium.

The Hawks have been able to knock off multiple top eight teams, including the Magpies, Cats and Giants.

When these sides played earlier in the season, it was the Eagles who had the last laugh, winning by a single goal that was kicked late in the match.

Jack Redden to get 25 disposals @ $2.30 with Sportsbet
Although he has fallen out of form recently, Redden has a good record against the Hawks and could spring right back into the top ball-getters. The former Lion will match up with James Worpel and be around the footy all day, giving him ample opportunity to get 25 touches.

Chad Wingard to get 25 disposals @ $2.50 with Sportsbet
One asset of Wingard’s game that has improved this season is his ability to get to the right spots. Instead of playing forward and relying on others delivering to him, Wingard can now express his talents in the centre, which has led him to getting over 25 in two of his last three games.

Jack Darling to kick three goals
If not for the downpour of rain at the MCG, Darling could have kicked a bag of goals against Richmond last week. He kicked two early goals but didn’t impact the scoreboard afterward. Darling will have the edge over James Sicily in the air, allowing him to play deep in attack.

Tim O’Brien to kick two goals
Last week the Hawks decided to swing O’Brien forward instead of his usual 2019 position in the defence. Not only did the big man play the role well, he was also good enough to have five shots on goal, which only amounted to two majors. If O’Brien plays forward again and kicks straight, he will kick a couple.

Total match points over 159.5 @ $1.89 with Bet365
With the season on the line for the Hawks, they will have to play a more reckless and unpredictable style compared to their usual controlled brand. There’s no reason to slow down the match if you are behind, and we think Alastair Clarkson will instruct his players to take the game on, even if it means losing by 40 points instead of 15.

The Eagles will take pride in delivering the final blow to the Hawks and should win this match by a considerable margin. A shock loss could push West Coast outside the top four, which is the last thing Adam Simpson wants at this time of the year.