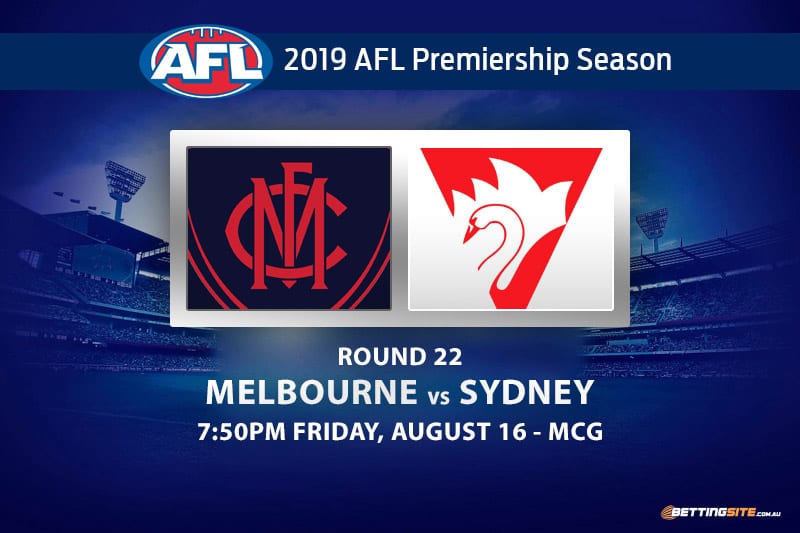 Two of Australian sport’s oldest rivals will battle it out at this Friday night in the opening game of AFL Round 22.

Neither of Melbourne and Sydney have won a match since in the past five weeks in what has been a disappointing season for both clubs.

A combination of poor timing and devastating injuries has ravaged the Demons, derailing a 2019 campaign that promised so much after they reached the preliminary finals last year.

Besides round four’s win to the Dees, the Swans have won the past four encounters between these two, including a close one last season at the MCG.

With Lance Franklin ruled out again for the Swans and Steven May unavailable for the Demons, it is fair to say injuries have plagued both sides.

Melbourne put up a fight against the Pies last week but fell short after a good last quarter, whereas the Swans were beaten from pillar to post by Port Adelaide.

Christian Salem to get 25 disposals @ $1.91 with Sportsbet
Salem has gathered less than 20 disposals only once in 2019, which has been a breakout season for the classy defender. With an average of 24.8 disposals per game, the Hampton Rovers product has been a great asset off half-back for the Demons. The Swans will play a contested game, which will allow Salem to get plenty of outlet kicks running behind the contest.

Oliver Florent to get 25 disposals @ $3.75 with Sportsbet
Not only is Florent enjoying a breakout season, his form in August is excellent so far. The 21-year-old Swan racked up 28 and 29 disposals in his last two matches, the second most out of all his teammates in the same time period. Florent also had 25 touches against the Demons earlier in the season.

Christian Petracca to kick two goals
Due to injuries and absences of other Melbourne players, Petracca has become the club’s leading goalkicker in 2019. With 22 goals in 20 games, he has been one of the few Demons players to show genuine promise in the forward half.

Sam Reid to kick two goals
With Steven May ruled out for the rest of the season, the biggest Sydney forward will be in prime position to kick a bag. Reid has kicked multiple goals in seven games this season, including a bag of six against Collingwood back in round 10.

Melbourne Demons to lead at quarter-time @ $1.72 with Sportsbet
The Demons start off games with a flurry and more often than not take the lead in the first quarter. In the past three weeks they have led at quarter-time twice, while they were only a single point behind the Tigers.

With Max Gawn in the middle of the ground, Melbourne will be on top in the stoppages thanks to young guns Clayton Oliver and Angus Brayshaw. The Demons will win in a close slugfest.