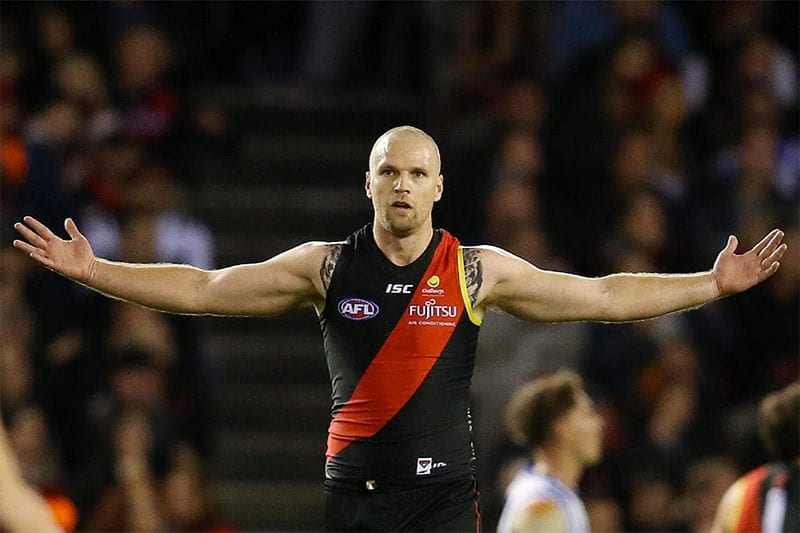 It was one of several problems that forced him to leave the Western Bulldogs, where he won an AFL Premiership in 2016.

He arrived at Essendon out of shape and out of sorts last year, but 2019 has seen a fitter, hungrier Stringer become an indispensable asset for the Bombers.

According to the 25-year-old forward, it is no coincidence that his form has improved since he started getting on top of his gambling issues.

“It was a tough period in my life, and it’s probably hindered me for probably six or seven years,” Stringer told the Footy Classified panel on Monday night.

“It’s probably only been the last, sort of year that I’ve got control of it. I think that’s starting to show in my football as well.

“I haven’t been on social media for the last year and a half … It’s helped me mentally, unbelievable.”

Stringer is not the only professional footballer to struggle with gambling addiction.

Former Melbourne star David Schwartz has spoken openly of his compulsive betting habits, while a number of current players are known to have racked up massive debts on the punt.

The twin issues of betting in football and youth gambling culture were thrown into stark relief earlier this year when Collingwood’s Jaidyn Stephenson was handed a lengthy suspension for placing bets on games involving his own club.

In Stringer’s experience, addressing such problems head-on and discussing them openly can help.

“Whether it’s an issue or not, I can only speak for myself,” he said.

“Not too many people come out and say they have a gambling problem whereas for me, mine was thrown out there. So it sort of makes it harder but I’m thankful for that being out there because it’s allowed me to shed some light on a serious problem.

“I’ve spoken to the (Essendon) players about having a gambling addiction. I’ve spoken to the younger kids about the challenges you face and to steer clear of going down that path and how it can impact on your life.”

Having played a crucial role in Essendon’s dramatic win over the Gold Coast Suns last weekend, Stringer will look to continue his impressive run when the Bombers take on Port Adelaide at Marvel Stadium this Saturday.