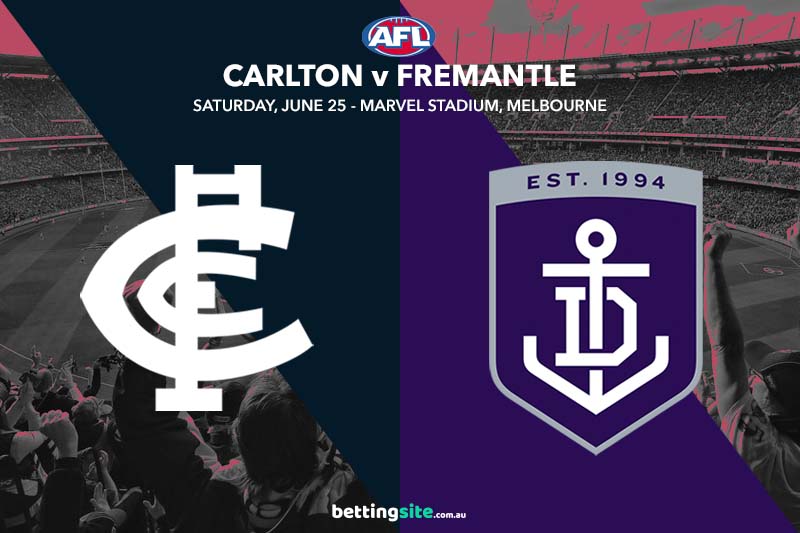 Can the Carlton Blues overcome their growing injury list when they host the high-flying Fremantle Dockers at Marvel Stadium for round 15 of the 2022 AFL Premiership season?

The Carlton Blues face a significant challenge when they throw their injury depleted side out against dry-track specialists Fremantle. With the game to be played under the Marvel Stadium roof, the Dockers should get conditions to suit and will be looking to grab 4 vital premiership points.

The Carlton reserves are looking somewhat bare as they scramble to fill in for key personnel lost to mid-season injury. The Blues’ brains trust will be hoping to survive a potential mini-form slump and get their best talent back on the park in time for a September run.

We have been riding the Fremantle Dockers hard most of the season as betting markets have been slow to correctly acknowledge their true capabilities. Except for a couple of wet-track shockers, the young side has been a model of winning consistency and sit on equal top ladder position with the Lions and Demons.

A slightly inferior percentage has Freo officially third, but it will be no surprise to see them hold a coveted top four spot for the length of the home and away season. We are especially impressed by the Docker’s work rate and willingness to apply forward pressure, a playing style that should hold them in good stead as the stakes increase.

Carlton midfielder Sam Walsh has been a huge factor in the team’s stellar 2022 season. The 21-year-old is averaging an enormous 32.2 disposals per game, as well 3.2 clearances, and 17.5 handballs. The kid knows how to find the ball and feed it out to teammates on the run, a vital link in the Carlton attacking chain.

Freo champion midfielder Nat Fyfe returned to footy action in round 13 and posted a solid display. It will take the Brownlow medallist some time to fully hit his straps, but Fyfe grabbed 22 disposals against the Hawks, won 6 clearances, and booted a vital goal. He must be wrapped to return to a team that has been flying in his absence, and the senior champ Nat Fyfe versus the young gun Same Walsh is our key match-up.

Palmerbet have assessed this game as close to a coin flip, based on a perception that the Blues enjoy a home ground advantage here. The line has been set at a skinny 4.5 points, so a close encounter is expected. As mentioned, weather won’t be a factor, and we are happy to stick with the Dockers. They have the midfield talent to run with Carlton’s best and will just need to create enough scoring opportunities to get over the line. Matt Taberner is listed as a ‘test’ for this game and will be a massive inclusion if he takes the park. Fremantle -4.5 points is the official tip, and we might give it a solid nudge.

For the value hunters, who are never satisfied with even money bets, we suggest linking the Freo line bet with some other likely occurrences. Our same game multi is Freo-4.5, into Rory Lobb 2+ goals, into Will Brodie 25+ disposals. This triple-header will return a handsome $4.24 with the top AFL betting sites.