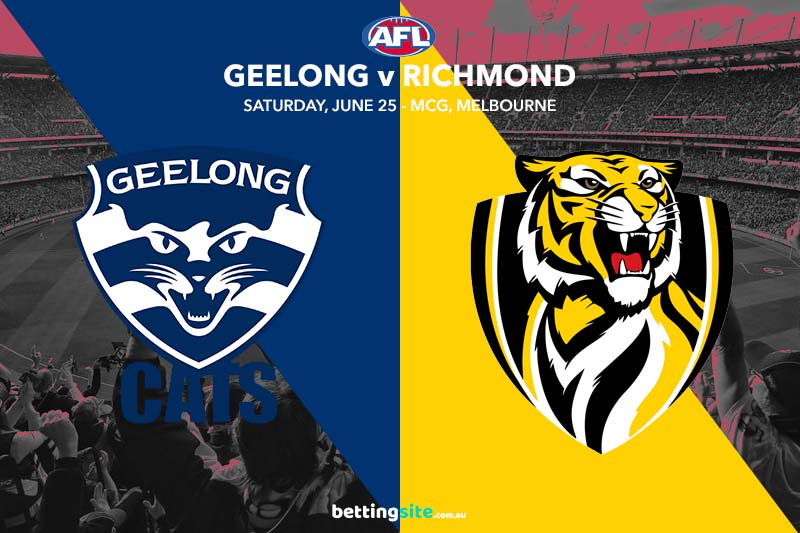 There are a handful of AFL matches scheduled during round 15 that you must keep an eye on, and this Saturday’s clash between Geelong and Richmond at the MCG is certainly one of them.

Ever since the 2020 Grand Final when the Tigers triumphed over the Cats, there has been some added spice to the matchup, as the Cats brought their best to both contests last season.

Chris Scott’s men smashed the Tigers by 63-points in their first meeting of 2021, and they then doubled-down later in the season and beat them by over six goals in a low-scoring affair.

It may not be as simple for the Cats this time around, as the Richmond Tigers are one of the form teams of the competition after winning four of their last five matches.

The Cats will have plenty of belief considering they currently hold the equal-longest winning streak in the competition with four consecutive victories, while one of their marquee players makes a return.

Patrick Dangerfield will return for the Geelong Cats this Saturday after missing the last month with a calf injury, while Dustin Martin will make a return of his own for the Tigers after missing last week with the flu.

This top eight clash is almost certainly going to be one of the matches of the round, but where does the best value lie from a betting perspective?

The two bookends for each team will be the most important players on the ground this weekend, as Coleman Medal hopefuls Jeremy Cameron and Tom Lynch could provide a shootout at the MCG this Saturday.

Both key forwards enter this contest in great form, with Cameron kicking 11 goals in his last three outings, while Lynch is in blistering form having slotted 20 across his last five matches. You can back in both teams to target their spearheads this weekend on offence, which will lead to both stars kicking a few majors on the night.

Geelong Cats to win by 25+
The Cats have been hard to fault across their last month of performances, while we also think last week’s narrow win over the Eagles was a fine effort given it was the best game West Coast has played in months. Dangerfield adds some class and power to their midfield mix, while Jeremy Cameron and Tom Hawkins will expose the Tigers with their size and strength.

Mitch Duncan 25+ disposals
Mitch Duncan was once the picture of consistency for the Geelong Cats, as he played almost every game for years on end and produce many fantastic matches in the hoops. Duncan has not been his consistent self in 2022, but he is still one of the best midfielders in his side. The 2011 Grand Finalist has collected over 25 disposals in three of his last four matches against the Tigers, which includes a 34-disposal effort in 2019 and another 30-disposal game last season.

Just as the Cats did twice in 2021, we expect they will deal the Tigers a heavy blow off the back of a handy performance from Mitch Duncan in the midfield, while Tom Lynch puts up a valiant effort for the visitors in front of goal.
Geelong 25+ / Duncan 25+ / Lynch 2+ goals @ $11.48 with Ladbrokes