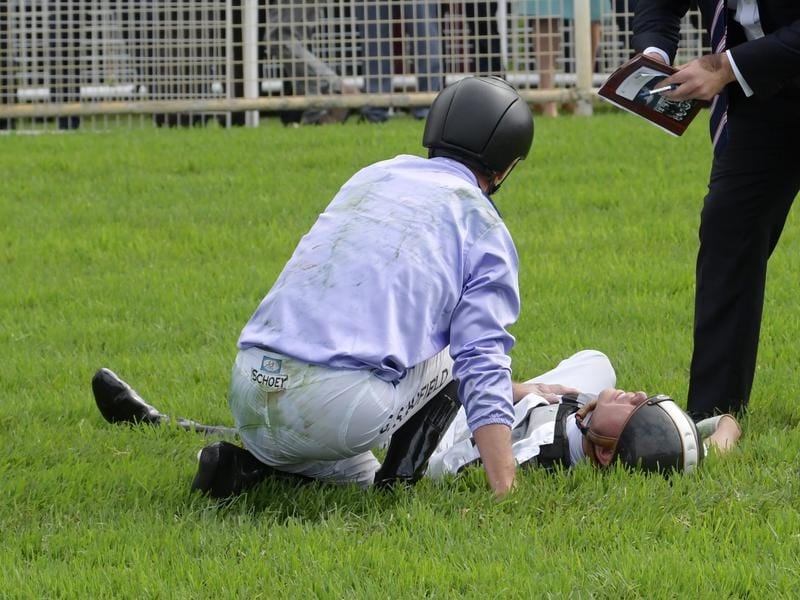 Andrew Adkins (prone) has recovered from injuries received in a fall and returns to Rosehilll.

There is unlikely to be a more excited jockey at Rosehill than Andrew Adkins, who makes his return to metropolitan racing after more than four months on the sidelines.

Adkins suffered serious injuries in a race fall at Randwick in April, fracturing three vertebrae, his sternum, cheekbone, nose and some ribs when he was catapulted from War Baron during the final stages of the Fernhill Handicap.

“I was pretty crunched up,” Adkins said.

It has been a long road to recovery and the jockey admits he has tried to avoid watching too many races during his rehabilitation.

“I actually used it as a break from racing and I didn’t watch a lot of racing while I was off,” he said.

“I thought I might have got a bit down watching horses I may or may not have been on, so I went fishing and went out with friends, so I didn’t get down in the dumps too much.”

Adkins returned to riding trackwork a month ago and has also been putting in the hard yards with a personal trainer and physiotherapist.

He says he feels fitter and stronger than he ever has and is itching to get back in the race day saddle.

He will dip his toe back in the water with two rides at Gosford on Friday before he returns to Sydney racing a day later for three mounts, including Aspect Ratio for John Sargent in the Group Three Ming Dynasty Quality (1400m).

The filly contested the Randwick race in which Adkins fell in April, finishing sixth, before resuming with a narrow second at Goulburn earlier this month.

Adkins had his first sit on her this week and was suitably impressed.

“I had a little ride on her (Thursday) morning and she felt good and worked nicely,” Adkins said.

He also partners Defy in the TAB Highway Handicap (1400m) and the John Thompson-trained The Promise in the ATC Member Tours Handicap (1500m).

The Promise is on a seven-day back-up after finishing third to Valentino Rossa at Randwick last Saturday, and Adkins has enjoyed a successful association with her having ridden her twice for two wins.

“If we can make it three from three, that would be all right,” Adkins said.

“But I’m just excited to get back out there on Saturday, to get back doing what I enjoy and get back working.”